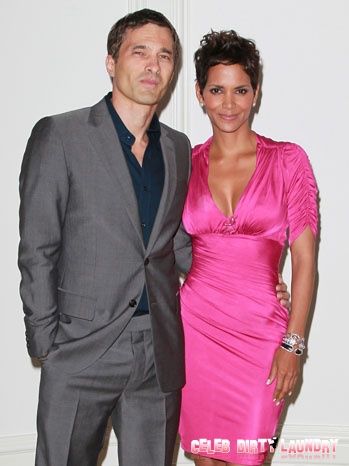 Kittykats, Halle Berry is engaged to Olivier Martinez (sigh).  Normally this would be a cause for celebration but in Halle’s case it’s more likely another disaster just waiting to happen. I don’t know who we should bend a knee and pray for, him or her? Is she going for Elizabeth Taylor’s record or what?  I mean she has the hot body and everything but…

Okay, let’s count – first there was David Justice, who she claimed hit her.  That marriage was short lived.  Then there was Eric Benet.  I had high hopes for that one because they were together a good length of time and she seemed to be grounded and it was going good for a while.  Too good, low and behold he was cheating on her, so he had to go (go figure…).

Then she goes out with Gabriel Aubrey for a hot minute and ends up pregnant.  Ok she has the baby and they try working it out like any normal couple, true Halle style this comes to an abrupt and bitter end.  If that is not bad enough, here comes a nasty custody battle.

Now I don’t know what’s going on with her but she cannot seem to keep a man.  By that I mean after that many guys, and there’s plenty more ho she didn’t marry, you have to say what is she doing?

Halle – stop going from one situation to another situation without giving yourself enough time to figure out why it’s not working.  Halle we all love you as an actress and person, but you are seriously rushing into things.

All that to the side, doesn’t Halle have a daughter, Nahla, to raise?  So that’s what the daughter see’s, mom can’t be alone so she grabs a guy.  There you go chickadoodles proof positive that money cannot buy you love or happiness. Well I’m like the rest of you guys, I give it a year and a half.