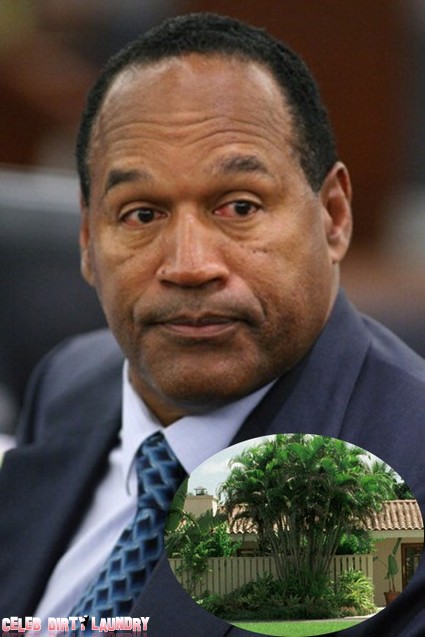 OJ Simpson lost his freedom in 2008 and now he is losing his Florida home. OJ has been locked up doing hard time in Lovelock Correctional Center near Reno, Nevada, since he was sentenced to up to 33 years on charges of kidnapping, armed robbery and assault with a deadly weapon. The conviction stemmed from an incident in 2007, in which OJ stole a bunch of sports memorabilia at gunpoint. Now JPMorgan Chase bank is foreclosing on the murderer’s 4 bedroom, 4 bathroom home in Miami.

For those of you who might not remember or know, OJ murdered his ex-wife Nicole Brown Simpson and her friend Ronald Goldman in cold blood on June 12, 1994. Through a ridiculous miscarriage of justice – assisted by Kim Kardashian’s late father, the lawyer Robert Kardashian – OJ was found not guilty by the jury. He was at least as guilty as Casey Anthony – and was later found liable for the deaths in a civil suit brought by the families of the two victims.

Sometimes what goes around comes around and now OJ sits where he belongs – doing hard time in prison.

Sources at Lovelock Correctional Center say OJ is a walking heart attack. The disgraced football legend has packed on 50 pounds since being locked up and his family now fears that he’ll die of cardiac arrest behind bars.

At 6-foot-1, the convict weighed 225 pounds when he entered prison, but now he’s ballooned to a blubbery 275 pounds by pigging out on junk food and going without exercise according to a family insider. Simpson is also still suffering psychological effects from being beaten unconscious by a young skinhead in a brutal prison yard attack.

We hate to say it but if anyone deserves this sad fate it is OJ. His arrogance and total lack of respect for other people got him to where he is today.