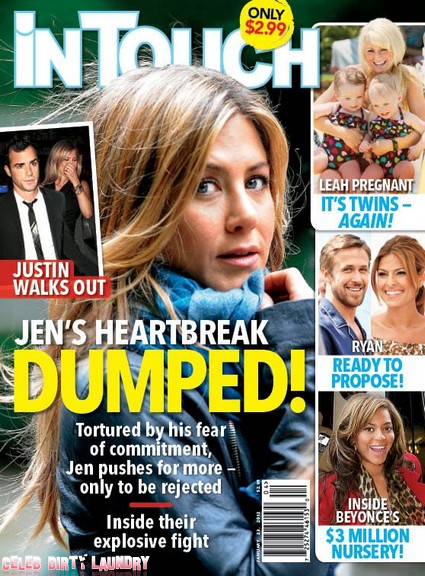 The current issue of In Touch Magazine features the cover story ‘Jen’s Heartbreak Dumped!.’  The magazine claims that Jennifer Aniston‘s boyfriend Justin Theroux has kicked her to the curb  over his fears of commitment.   They claim Jennifer pushed Justin to take their relationship to the next level and he rejected her.  They have all the details on their explosive fight and how Justin walked out after it.

When Jennifer originally hooked up with Justin he dumped his girlfriend of 14 years Heidi Bivens who he was living with at the time.  Guess when Heidi sees this report she will be smiling – payback is a bitch!  What do you think, are Jennifer and Justin breaking up or is this just groundless speculation by the magazine?

Jennifer has not had much luck with men since she was dumped by Brad Pitt.  At the end of the year the tabloids were claiming that Jennifer and Justin were getting married – guess that has all changed.

Also included in this week’s magazine they have all the details on Beyonce’s $3 million nursery for her new daughter.  Beyonce and Jay Z became the proud parents of a baby girl Blue Ivy this week.

To find out all the details of Jennifer’s heartbreak, pick up the current issue of In Touch Magazine.