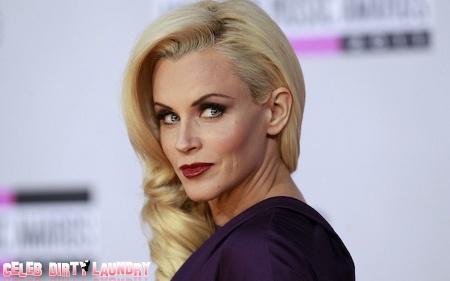 After Jim Carrey and Jenny McCarthy‘s split — after nearly five years together — it seems that it is her autistic son Evan that has suffered the most.  Nearly two years after the breakup, McCarthy’s ten-year-old son is still asking to see Carrey, who blatantly refuses to maintain any type of contact with the boy.  McCarthy was on Howard Stern’s show on Monday and decided to discuss the situation about her ex.

“I think that sometimes people need to take a real break from each other,” she explained. “But I still love him. I think you can love people from a distance and respect him. But as a mother, you just hope when you have a relationship with someone, it has nothing to do with the child when you break up.  I’ve tried to ask [Jim] numerous times [to see Evan], because my son still asks.”

Jenny says Jim refuses to see the boy and that Evan asks about him and says he misses him on a weekly basis.  “I tell [Evan] that someday you’ll cross paths, meet again. . . [but] it’s hard. He’s been in therapy. It’s a process, he’s working on it.”

Jim Carrey has responded to McCarthy’s claims that he has been coldhearted towards Evan, saying, “I will always do what I believe is in the best interest of Evan’s well being.  It’s unfortunate that Evan’s privacy is not being considered.  I love Evan very much and will miss him always.”

Some people, and for valid reasons I might add, think that this is a very opportune time for Jenny to come out with this little anecdote, being that her new reality show Love in the Wild — which she hosts — has just debuted.

Do you think that Carrey is doing what is in Evan’s best interest?  Do you think maybe he was told that staying in touch with the boy could lead to confusion and that it was in his best interest to simply let go? Is Jenny just trying to conjure up some sympathy to help boost her ratings? Tell us what you think in the comments below!