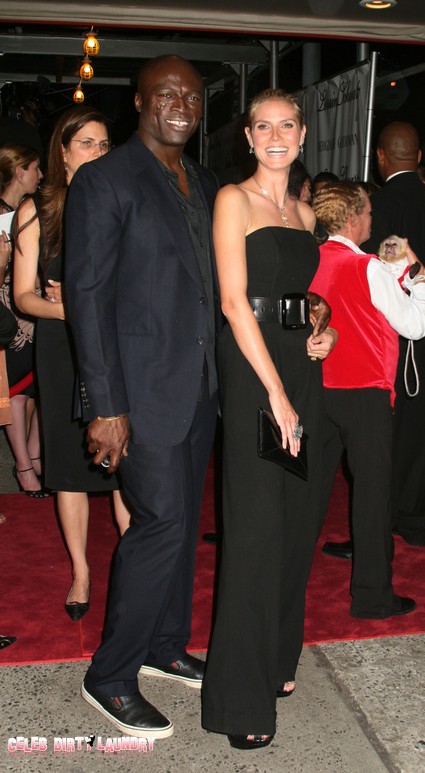 Yesterday TMZ broke the story that Heidi Klum would be filing for divorce from Seal this week citing irreconcilable differences between the two. The couple married at Seal’s beachfront home in Mexico in 2005 and had been one of Hollywood’s most ‘in love’ and devoted couples, at least that’s how they appeared for public consumption. They even went through an elaborate ceremony each year recommitting to their marriage vows.

So when news of their imminent divorce broke people were understandably shocked. Now People mag has claimed to have a source who says they are still wearing their wedding bands and that while the couple are fighting horribly they are not ready to throw in the towel and divorce… at least not just yet.

“They’ve been fighting a lot lately, but they have no plans to announce a split right now,” the source says. “They’re not divorcing.”  Together at their Brentwood, Calif., home on Saturday, “they seem to be doing a lot better,” the source adds. “They’re both wearing their wedding bands.”

It seems that their are two basic problems for the couple – Seal is away from Heidi way to much and when he is away he is partying like Charlie Sheen.

According to People’s insider, in recent months, being apart and at long distance has put pressure on the relationship.

On tour to promote his new album, Soul 2, Seal recently flew solo to New York to appear on Late Show with David Letterman, then to London for more commitments. Seal is due to appear this week on The Ellen DeGeneres Show, Jimmy Kimmel Live! and Tavis Smiley and Heidi is to travel to Germany soon to work on the seventh season of Germany’s Next Top Model, which premieres Feb. 23.

But the Mail Online says claims have emerged that Heidi is divorcing Seal because of his hard partying.  A source has said their relationship was in trouble because the singer was ‘off the rails.’

The tension is believed to have started when the pair holidayed with their three children, and Heidi’s daughter from a previous relationship, in Ibiza in August.

A source told the Sunday Mirror:  ‘They were always the couple everybody strived to be but lately it all started to change.  ‘Seal seems to have been partying a lot more often than usual.”

‘When they had their holiday in Ibiza last summer, Seal hit it hard, was out at clubs and with his friends a lot and Heidi was left with their kids trying to enjoy herself. The cracks were appearing and everybody was talking during that trip. He seemed off the rails.’

The insider added: ‘They’ve spent a lot of time apart too on work assignments and that hasn’t helped matters.  ‘Then when Seal came back to the UK to do promotional work for his next album, he seemed sleepy and not with it on shows like Loose Women, when he was very late for his appearance.’

German-born Heidi is reportedly expected to file papers at Los Angeles County Superior Court this week citing irreconcilable differences with Seal – will she or won’t she?