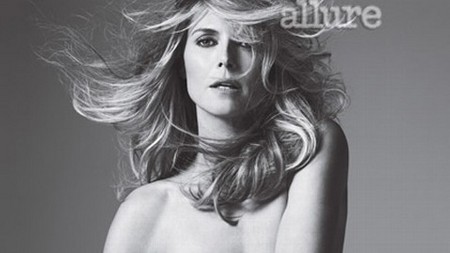 Heidi Klum might be taking off her clothes to send Seal a message.  Even though she is in the midst of a divorce from her estranged husband, Seal, she is proud to put herself on display.  Heidi describes the end of her marriage as a “curveball” which we assume implies that Seal cheated on her.  The supermodel and Seal split in January but Heidi only filed for divorce last week.

Nevertheless she managed to get undressed for the cameras and brag that she has never had plastic surgery.  Is Heidi trying to show Seal and the rest of the world that she is still attractive?  Did Seal’s fooling around leave Heidi feeling less than? After seven years of marriage Heidi is desperately trying to understand how to adjust to the changes in her life.

The 38-year-old model told Allure magazine how proud she is to have never had plastic surgery.  Why is she bragging about this – given that it is true, why does she need to tell us?  I mean at 38 why should a supermodel need cosmetic surgery anyway… oh yes, those children she gave birth to!  Heidi raises children Leni, seven, Henry, six, Johan, five, and two-year-old Lou with Seal.  Are there any celebs in Hollywood who don’t have cosmetic surgery?  Is a non-surgical approach to life even legal there?

Heidi claimed: “I’m proud to be able to say, in this day and age, I haven’t done anything. Everyone has a view of what’s not pretty and [plastic surgery] just doesn’t look pretty to me.”

Heidi waxed philosophic to Allure:  “Sometimes life throws you a curveball, and then you just figure it out and deal with it, but my dream always was that – to have the perfect family and have lots of children and a beautiful garden and trampolines and swings and things.”

“I had dreams of how I wanted things to be and planned for things and, as we all know today, they don’t always turn out as you dreamt them in your head.”

“I don’t resent anything that ever happened. Things just turn out the way they turn out.”

SEE: Seal Gets Cosy With Blonde TV Star In Australia

Who knows the truth here?  Is Heidi crushed – is she relieved?  We know Seal could give a rat’s ass about losing Heidi.  He was out and about with a hot blond in Australia over the weekend!