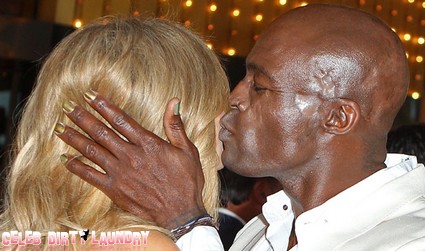 Seal is moving on.  The singer – who split with wife Heidi Klum two months ago – has found himself a new, younger, leggy blonde. He’s been snapped getting very cosy with one of his co-stars on Australian TV.

The Brit is spending a lot of time Down Under at the moment because he’s a Judge on the Aussie version of The Voice. But it’s not all work and no play. Seal has caught the eye of the only female on the panel – a singer by the name of Delta Goodrem. And the pair have hit it off big time. They’ve been flirting outrageously and spending a lot of time together on set.

The pair appeared at an awards show in Melbourne on Sunday and there were definite sparks in the air. Seal wasn’t shy …even giving her a kiss while the cameras were around. The 49 year old father of four is quite taken with his 27 year old songbird despite the big age difference and rumors are flying that the twosome are more than just good friends.

Delta is single after splitting with Nick Jonas a couple of months back. She’s desperate to break the US  and having someone like Seal on her arm could be the perfect door opener. He’s back on the market after that seven year marriage to Supermodel Heidi Klum. From these pictures last night you could say the relationship has been sealed with a kiss.