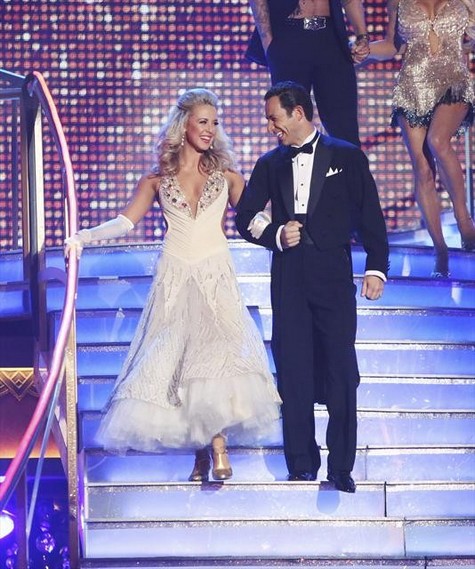 Helio Castroneves danced the Jive to Everybody Talks by the Neon Trees for his performance tonight on Dancing With The Stars All-Stars 2012 Season 15.  All 12 couples hit the stage performing either the Jive or the Quickstep to impress the judges and viewers at home, hoping they’re not the first couple sent home.   We recapped the tonight’s show for you and if you want to see how all the couples did go HERE!

Helio Castroneves and professional dancer Chelsie Hightower dancing the Jive.  Chelsie had this to say about their dance tonight,  “We have the Jive next week. It’s going to be a great number. We want to bring some edge to it, but we also want to bring his personality back. Helio has such an infectious personality, we want to continue to bring that. Because people smile when he dances. I smile when he dances! If he can make audiences smile, I think that’s a great thing. So we’re going to continue with that.”

Judges Comments:  Len: “You got style with a smile, we saw fun and entertainment but I thought you were pumping your knees too high.”  Bruno: “It was a sweet jive, Len is right your knees were too high but it didn’t take away from the fun of the dance.”  Carrie Ann: “Last week I was under whelmed, but this week your body caught up with the charm, you were right on.”

Vote for Helio Castroneves and his professional dancer Chelsie Hightower by calling  #: 1-800-868-3404

Watch the video below and let us know what you think? Do you think Helios did enough to win the Mirror Ball Trophy? Sound out in the comments below!