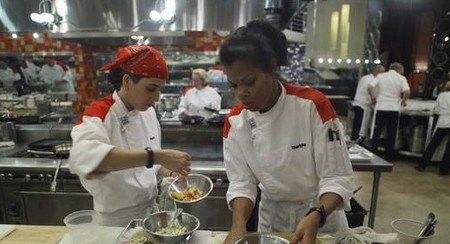 Tonight on FOX is an all new episode of Hell’s Kitchen. On tonight’s show the remaining 13 Chef’s compete and you know we will have plenty of craziness by Chef Gordon Ramsay. If you missed last night’s show, we have a full and detailed recap here for you.

On last night’s episode Hell’s Kitchen went south of the border with Mexican night.  The women won the challenge and while the women are learning how to dance, the men are all pissed off while they prepping for dinner service.

Winning the challenge did not really help the women in last night’s dinner service and Chef Gordon Ramsay called the dinner service a complete disaster and told the teams that they both lost.

The blue team nominated Guy and Patrick, the red team Barbie and Danielle to go home. The chefs pleaded their case as to why they should remain in Hell’s Kitchen. Chef Ramsay did not think Barbie deserved to be in the bottom, he sent her back in line with the rest of the chefs.

Although we wanted to know last night who went home, we found out that nope, we have to wait till tonight to see who will be eliminated.  Meanwhile the ratings for last night’s Hell’s Kitchen was down from last week.

RECAP: Tonight Hell’s Kitchen continues with a continuation from last night when both teams offered up their nominations; Chef Ramsay sends Patrick back in line, Danielle is eliminated.

Chef Ramsay asks the chefs if there are ready to fight back, after a third attempt at saying “yes chef” he tells them to f*ck off and get out.
Dana is beside herself, she was best friends with Danielle. Meanwhile the men feel that the men are stronger. Trouble is brewing, Royce is trying to take control of men.

Time for the challenge, Chef Ramsay shows the chefs trends in the food business, from the 1950’s; the Jello mold and the tv dinner, from the 1970’s: fondue and from the 1990’s; Asian Infusion. For the first time ever, it’s fashion night in Hell’s Kitchen. The designers are; David Meister, Amanda Che and Ina Soltani. Each team will present a three course meal for the fashionistas. The winning dishes will be on the men for the first ever Hell’s Kitchen fashion night.

The judges deliver, the men win the challenge with their sea bass. Kimmie is pissed off and blaming Robyn because they basically lost because Robyn didn’t use spices and Kimmie told her to.

The men are going to get a couple of grand to spend at a boutique in Malibu, then they will go wine tasting. The women have to hand build a runway, make centerpieces for the fashion night.

The women are losing it, their punishment involves a lot of hard labour.

The women decide to blow off some steam and goof off down the runway. Meanwhile, the men are enjoying their day in the lap of luxury.

The women are disgusted with Tifanny, she is burping and farting just as the blue team gets back.

The next day, Clemenza is up early and wakes everyone up and getting started with a brand new menu. Frustration is already mounting in the blue kitchen and the red kitchen is about to explode because Robyn just can’t let go that Kimmie blamed her for the loss.

Hells Kitchen is moments from opening and Chef Ramsay briefs everyone and how he wants everything to go, the timing is very important.

The service hasn’t even started yet and Chef Ramsay is going to throw Clemenza out for starting the scallops.

Next week the show continues with the fashion show and when the bikini clad models go down the runway, the blue team makes rookie mistakes. Meanwhile the red team is ready to explode, Kimmie probably weighs in at 300 pounds and if I were Robyn, I wouldn’t want her on my bad side.

Stay tuned for the continuation, next week.