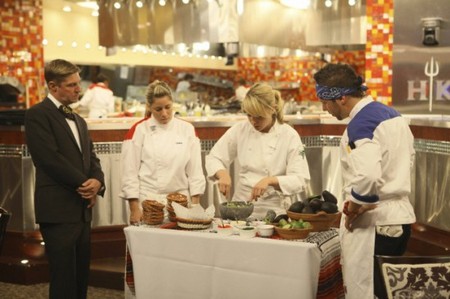 Our favorite chef Gordon Ramsay returns to FOX tonight with a new episode of his popular reality show Hell’s Kitchen. On tonight’s show we are down to 14 chefs and with chef Gordon Ramsay at the helm there is always more insanity and drama than one sees on most reality TV. Stay tuned as we live blog the  episode with all the up-to-the-minute details and action.

Last week brought us two episodes, in the first Robin and Barbie were at war, lots of cursing and a whole lot of tension on the women’s team. Chef Ramsey broke up a potential brawl when he called everyone downstairs, whew! Even though there was chaos on the women’s team, they won the challenge and went to San Diego to visit the most amazing safari by private jet. The men lost and had to do some difficult and hard labour, in the end, Briana was eliminated. If you missed the show, you can read the full recap HERE.

In the second episode, the guys win the challenge and get a VIP trip to the racetrack while the ladies have to herd sheep and then prep the kitchen. Both teams did terrible during the dinner service, but in the end, Don went home and Roshni moved over to the men’s team. If you missed the show, you can read the full recap HERE.

Tonight’s episode is going to be an exciting one filled with drama that you won’t want to miss, so be sure to tune in for our live coverage of the show tonight at 8 PM EST!  While you wait for our recap hit the comments and let us know what you think of Hell’s Kitchen 2012, so far?

RECAP: Brian can’t believe that he was that close to being eliminated last week and realizes that he needs to step up his game. Meanwhile, Roshni is promising to give 100% to the men’s blue team. The women are still a team divided, everyone hates each other.

After a rough dinner service and a shake up on the blue team, Gordon Ramsay is not giving up.  Chef Ramsay announces to the chefs that they are going to be preparing Mexican food. The challenge today required the chefs to prepare five amazing dishes. First, they have to play a game of pinata and run around the room grabbing balls that will give them their ingredients. Using the ingredients from the balls that they collected, each team has to prepare five fine dining dishes from traditional Mexican dishes.

The red team (women) and the blue team (men) are at a tie after the guest judges deliver, it is up to Chef Ramsay to decide who is the winner, he picks the red team. The women are headed off for a Mexican feast, their limo is waiting. The men have to prepare everything for the dinner service, without any help from the women.

While the women are learning how to dance, the men are all pissed off while they are prepping for dinner service.

The women are back, with their sombreros; which only further aggravates the men. It’s the start of a new day and Robyn is determined to clear the air because the women were talking behind her back.  Kimmie and Dana start getting into it, Kimmie calls her a liar and Dana claims she said nothing about Robyn’s dish.

It’s time for dinner service, Kimme is determined to start off strong and hopes her team will follow suit. Barbie starts off on the wrong foot, she screws up the flavouring on the muscles.

In the blue kitchen, Guy is ready to show chef what he’s got with the Tuna, but he falls flat.

Barbie has bounced back and her muscles are making out to the dining area. The red team is moving on to entrees when Chef Ramsay discovers fish and meat on the same tray, he is pissed.

Chef Ramsay calls the dinner service a complete disaster and tells the teams that they both lose.

The blue team has nominated Guy and Patrick, the red team Barbie and Danielle. The chefs plead their case as to why they should remain in Hell’s Kitchen. Chef Ramsay doesn’t think Barbie deserves to be in the bottom, he sends her back in line with the rest of the chefs.

That’s it for tonight, next time we will find out who is going home, as well, Royce tries to gain power of the blue team and the red team explodes when Kimmie and Robyn come head to head. Stay tuned….