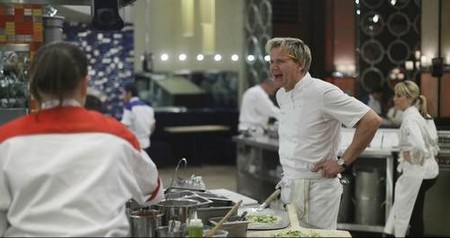 Tonight on FOX is an all new episode of Hell’s Kitchen. On tonight’s show the remaining 15 chef’s compete and must prepare four lamb dishes. If you missed last week’s show, we have a full and detailed recap here for you.

On last night’s show the remaining 16 chefs were challenged with preparing an all-American lunch for a unique group of diners. During dinner service, pressure mounted and tempers flared as another chef was sent home.

On tonight’s show the 15 Chefs Compete and the teams must cook four different lamb dishes, but they must overcome a challenge before the cooking starts.  Rumor has it on tonight’s show someone losing a finger. It is someone on the men’s team and the men lose a chef to the ER.

Will the chef come back to the competition?  We will find out tonight.  The women’s team starts to build alliances tonight, which seems impossible since they spend a lot of time bickering.

Stay tuned for our live coverage of the show tonight at 8PM EST! Meanwhile, while you wait hit the comments and let us know what you think of Season 10 of “Hell’s Kitchen” so far!

RECAP: Last night we saw the men’s team win for the very first time and Briana Swanson was told to hang up her coat.  The men were thrilled to actually finish dinner service.  Tiffany and Kimmie are not happy and they blame Barbie for their failing as a team.  The next morning all contestants are pushed out of bed at the crack of dawn to head to a farm for their next challenge.  Each team has to make four lamb dishes.  They have five minutes to run into the pen and catch sheep.  Each sheep has an ingredient attached to their back.  Robyn and Patrick aren’t afraid to get down and dirty with the animals.

Both teams go back to Hell’s Kitchen to gather and make four lamb dishes in 45 minutes.  Guy starts screaming after cutting himself. He quickly wraps it up and heads back to work as the clock ticks down.

Up first Tiffany and Danielle serve their lamb chop soufflé which the chef says is delish.  Clemenza’s lamb chop looks like “Steven Tyler’s earlobe” but tastes great. Both teams win a point.  Kimmie and Roshni’s currie lamb is also delicious.  Patrick serves a lamb and fennel sausage that doesn’t measure up.  Robyn’s rack of lamb is raw while Justin’s is grilled to perfection.  Dana and Christina’s braised lamb steak is also very good.  Chef Ramsey doesn’t have much to yell about just yet!

Royce and Brian’s dish is better than the girls and they win the last point to break the tie.  The guys win a VIP trip to the racetrack while the ladies have to herd the sheep and then prep the kitchen because Hell’s Kitchen will be opens this evening.

Chef gives Clemenza $100 bucks to bet on a horse and of course they lose their bet.  Kimmie is back in the kitchen starting a fight with Danielle over not much of anything.  Not sure exactly what the beef is but Kimmie seems very proud of the fact that she ate 5 lamb testicles.

Hell’s Kitchen opens for the fourth dinner service with the women at odds and snipping.  Meanwhile the mens team is tight as can be.  The girls struggle right off the bat and their risotto is undercooked thanks to Danielle. She and Robyn are miscommunicating galore but appetizers are somehow leaving the kitchen.  The men might fare worse as their salmon cooked by Brian is raw. To quote him, “I just can’t seem to cook fish tonight.”  He is overcooking and undercooking them one after another.  Until, wait for it, he ran out of cod completely.

Justin takes over on the meat station and prays he can get entrees out.  Roshni keeps dinners waiting on the red side. 90 minutes into service still no entrees have left the kitchen.  Don’sWellington’s are cooked to perfection and entrees finally start to move.  The girls are still waiting for Roshni’s Wellington to finish, putting their team behind. She is finally thrown out of the kitchen and Danielle takes over on the meat station.  It has turned into musical cooking stations as chef keeps throwing people out because they are having real problems cooking entrees.  The guys get confused and end up with two guys cooking bass at the same time for the same table.  Dinner service is a complete disaster.

Two hours into dinner service very few entrees have been served and half of the chef’s have been kicked out of the kitchen.  Ironically, fewer chefs mean better quality food prepared and actually leaving the kitchen.  Chef decides that both teams suck and each team have to nominate two people to be sent home.

The men choose Brian and Don.  The women choose Roshni and Danielle.  This is Roshni’s third time standing before chef facing elimination.  He decides that Don’s head isn’t at all in the game and asks for his jacket.  He also decides to put Roshni in with the guys for the next challenge.  Will it help her performance?  Tune in next week!