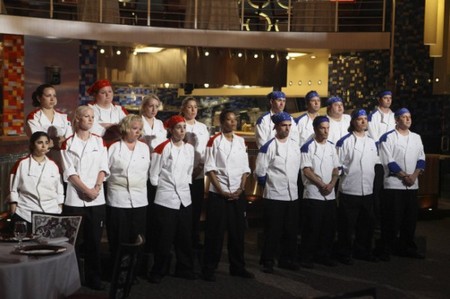 Our favorite chef Gordon Ramsay returns tonight with a new episode of his popular reality show Hell’s Kitchen. On tonight’s show we are down to 16 chefs and with chef Gordon Ramsay at the helm there is always more insanity and drama than one sees on most reality TV. Stay tuned as we live blog the premiere episode with all the up-to-the-minute details and action.

On last week’s two part premiere of Hell’s Kitchen the women get a good start and won the challenge hands down with hardly any effort because the men performed so pathetically.

In the kitchen the women couldn’t cook scallops properly; Chef Ramsay threw them out and calls them pathetic. In the dorm, Tiffany goes on at all the women especially Barbie for screwing up in the kitchen. The men also fail at dinner service and were thrown out of the kitchen. Chef Ramsay decides that both teams failed and they both have to put up people for elimination.

The women put up Barbie and Roshni. The men nominated Chris and Royce. Chef Ramsay’s decision is to put Roshni and Royce back in line, it was between Barbie and Chris and Chef Ramsay sent Chris home. If you missed the episode you can read the full recap here.

On last week’s episode Hell’s Kitchen welcomes America’s newest citizens with and the remaining 16 contestants will cook for them all-American fare. It looks like a feud in the kitchen may ruin the American dream.

We will be live Hell’s Kitchen episode 3 with all the excitement, so don’t forget to come back to this spot at 8:00 PM EST to spend the evening with us. Make sure to refresh often to get the most current results!

RECAP: Robin and Barbie are at war, lots of cursing and a whole lot of tension on the women’s team. It’s a new team and Barbie decides she shouldn’t be the only one up early cleaning, so she makes lots of noise. Tiffany wakes up and has a melt down, I sear I thought she was going to hit Barbie – these bitches are crazy. Chef Ramsey breaks up the potential brawl, he wants everyone downstairs with their jackets on.

The chefs head downstairs and find the kitchen full of people who are singing “God Bless America”, they have just become American citizens. Chef Ramsey announces that to congratulate them, the chefs will prepare an “All American” meal. The team that finishes the challenge first, will win.

The men are already having a hard time just getting the cob salads out, on the women’s team Barbie is not waiting for anyone and screwing up the pizzas terribly.

On the men’s team Clemenza thinks he is a master at pizza, but Chef Ramsey sends it back uncooked and this stalls the men’s kitchen.

Meanwhile, the women are rallying and getting their dishes out.

The blue team has hit a wall, there are raw sliders; the men try to get it together with Patrick’s help the sliders start going out.

The red team is making a dash to the finish line, the men are still behind. The women win and help the men finish their service. As a reward, the women are going to San Diego to visit the most amazing safari; they need to hurry because they are leaving by private jet. The men who have lost, have to do some very difficult and hard labour. Chef asks for one man to come forward as a leader and Patrick steps it up while Royce looks pissed.

The men are tasked with cutting a big thick tree that I don’t even think Paul Bunyan could have cut down.

While sharing a meal, Barbie apologizes to everyone for waking them up early in the morning.

At dinner service, one person on each time will act as waiters and the theme tonight is “focus”. It’s time for everyone to bring their “A” game; Royce is the first one to do well with the risotto. On the other hand, the women are failing miserably.

Barbie screws up the scallops again while Clamenza and Patrick have to restart their dishes because they were no in sync.

The women start falling behind while on the men’s side Clemenza has gone through all the beef Wellingtons and Chef Ramsey is furious.

Clemenza had to go speak to the Marines and ask if they can substitute the steak, they say yes. The men are now back on track, but the women are now on their third attempt and they have failed again with stone cold dumplings because of Roshni. Kimmie screws up the Wellington and it just goes on and on with the women screwing up, Chef Ramsay throws them all out of the kitchen.

Chef Ramsay found that Royce and Christina were the stars tonight, but the women failed miserably and are the losers.

The women nominate Barbie and Briana up for elimination, Chef Ramsay believes there should be one more up there, Roshni. Chef Ramsey thinks that Roshni is well over her head.

ELIMINATED : Briana is eliminated because Chef Ramsay didn’t think she was enough of a fighter, Barbie and Briana have another chance to redeem themselves.