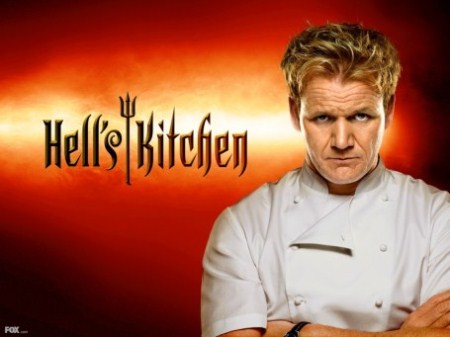 The biggest mouth in the kitchen, Chef Gordon Ramsay, was back last night for all new season of Hell’s Kitchen. The tasty competition aired on FOX and certainly didn’t disappoint last night. With chef Gordon Ramsay at the helm there is always more insanity and drama than one sees on most reality TV. Stay tuned as we live blog the premiere episode with all the up-to-the-minute details and action.

In episode 2 tonight, 17 chef’s will battle it on in the conclusion of the season opener.  Last night the 18 hopefuls were divided into two teams, men versus women.  In the opening, Chef Ramsay announced that the winner will work at Gordon Ramsay Steak at the Paris in Las Vegas for a whopping salary of $250,000.00. The battle began immediately last night with each contestant preparing his or her signature dishes. In the end, the women won and the men had to clean both kitchens.

At the dinner service, the men seemed more prepared but it didn’t get them far because their team was the first to be thrown out of the kitchen as they couldn’t get all the appetizers out.

One thing that really surprises me about people that go on this show, is that if they had even watched one previous season, they would know that they need to master cooking scallops and Beef Wellington or Chef Ramsay is going to be pissed. Yet again last night, there were still people that couldn’t handle it.

Essentially the dinner service was a complete disaster but Chef Ramsay had to announce a winning team and he gave that to the women and in the end, Chef Ramsay sent Tavon packing. Did you see the episode last night? If you missed it, you can read our full recap HERE.

Tonight is the second part of the two-part Season 10 premiere of Hell’s Kitchen. This is the first-time that an opening double header is shown over 2 consecutive nights and I am thrilled.

We will be live blogging tonight’s episode with all the excitement, so don’t forget to come back to this spot at 8:00 PM EST to spend the evening with us. Make sure to refresh often to get the most current results! One thing that Chef Ramsay has brought to gourmet cooking is 4-letter words – Enjoy!

RECAP: Last night 18 chef’s from all over America arrived at Hell’s Kitchen to battle it out for the grand prize and tonight there are 17 left to continue their quest.

After an embarrassing first dinner service, the chefs are ready to redeem themselves. Chef Ramsay sends a wakeup call to the contestants; rappers come in their bedroom bright and early to wake them and usher them outside. The supplier has made a delivery, there are 125 mounds of scallops in two mounds of ice and both teams need to get all those scallops in their respective buckets. Royce gets cut on the nose from a scallop, what a loser!

The women get a good start and win the challenge hands down with hardly any effort because the men performed so pathetically.

The women win a trip to the island of Catalina, in a yacht! The men are in for a crap day, they have to clean the mess outside, Chef Ramsay wants it pristine. Also, there some amazing prawns arriving and he wants the shelled, cleaned and deveined.

The women go zip lining, the women had a blast while the men break a sweat.

Robyn and Barbie have a battle brewing on the women’s team, but they need to put it aside because it’s time for dinner service and Chef Ramsay wants them all to make it about “pride” when they serve table side shrimp scampi tonight along side the other dishes.

Don is intimidated by Chef Ramsay, he is petrified and has an ocean of emotions when he prepares the pizza that completely fails.

Chef Ramsay rejects the women’s first attempt at risotto, but Guy on the men’s team aces it. Plates are getting returned to the kitchen, Brian gets called in to the kitchen because the shrimp scampi that he has served is raw and over cooked.

Chef Ramsay is screaming at the men, the scallops are terrible and he throws them to the corner and makes them all eat them. The men re-group and the women, under Barbie’s scallop cooking, are failing miserably as well.

On the men’s side there are six chefs to cook each scallop while one chef to wipe their butts!

The women finally finish appetizers and are now ready to serve entrees. Meanwhile, Chris is trying to redeem himself on the men’s side, but fails miserably.

The women still can’t cook scallops properly; Chef Ramsay throws them out and calls them pathetic. In the dorm, Tiffany goes on all the women especially Barbie for screwing up in the kitchen.

Meanwhile back in the kitchen, the men make their third attempt at dinner service and again they fail and are also thrown out of the kitchen.

Chef Ramsay is embarrassed for the chefs and thinks that clearly the losing team is the women and the men; both teams fail, a sinking ship and a runaway train. Both teams have to f*ck off and choose two people each to put up for elimination.

Chris is the first nominee for the men’s team and Barbie for the women’s team. In front of Chef Ramsay, the women put up Barbie and Roshni. The men nominated Chris and Royce.

Chef Ramsay calls Barbie, Roshni, Chris and Royce to the front. Barbie comes out guns blazing and tells Chef Ramsay that Kim brings down moral and Robyn should be the nominated to leave because she did worse on the service. Chris tries to defend himself, but fails miserably.

Chef Ramsay’s decision is to put Roshni and Royce back in line, it’s between Barbie and Chris.