BY Robyn Good on May 13, 2012 | Comments: one comment
Related : Reality TV, Recap, Survivor, Survivor: One World 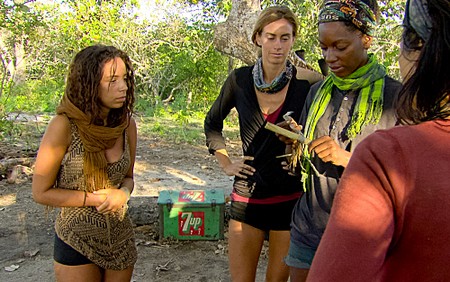 A brand new episode of Survivor: One World airs tonight on CBS and it is called “Perception Is Not Always Reality.” Tonight’s episode is the finale and a three house special – it will start with the two hour “taped” finale which will move us into the big reveal of who will win this season’s title of “Sole Survivor”, then the live “reunion” show. Stay tuned as we live blog tonight’s episode with all the up-to-the-minute details.

On Wednesday’s episode Tarzan tried his best to convince Alicia and Sabrina to take him to the finale.  There was a lot of back and forth between the women and a lot of manipulation going on, but at the end of the day Kim managed to convince the remaining ladies to go with their alliance and Tarzan was sent home.  If you missed the episode you can read our full and detailed recap here.

On tonight’s episode for the first time ever in Survivor history, an all-women final five battle for the title of Sole Survivor, and one castaway breaks down before the final Tribal Council.  The final five women are: Chelsea; Kim; Alicia; Sabrina and Christina.  My bets are on Kim to win since she basically had this game from day one.

We will see three tribal councils tonight, in the first two hours of the show.  From the preview it looks like all the women are confident they are winning the money, but of course there can be only one Ultimate Survivor!

Tonight’s show: Tonight’s show opens with a review of the week’s past and how they got the final five. Kim is happy with how far that, as women. But Kim knows that when she wakes up tomorrow she’s going to have to play as hard as she can.

Alicia is feeling a little bittersweet about getting rid of Tarzan. But this is her dream come true and all girls finale. Alicia is really confident in her alliance with Kim.

Kim takes Sabrina aside and asked what she wants to do. Kim tells Sabrina the only person who can beat them in the game is Chelsie.

Sabrina tells her it depends what the honoring. Sabrina is surprise she thought that they were all really tight. Sabrina asked Kim who she would consider to be in the final three. Sabrina is wondering if Chelsie wins immunity will she be the next person up on the chopping block.

The five remaining women head back to camp. Kim has so many options running around in her head she feels like her head is about to explode. At this point she has to think about the jury – everyone she sends someone to the jury is one vote for her or one vote against her.

Chelsie and Kim go to talk. Chelsie suggests they take Alicia out first. They all agreed to take Christina to the end. Chelsie tells Kim she believes Kim will win the game. Kim wishes she did not tell Chelsie she had the immunity Idol, because Chelsie will expect her to use it for her.

Sabrina tells Kim she would like to see Alicia go first. Meanwhile, Alicia is confident that Kim will stay loyal to her.

First Tribal Council: The ladies tell Jeff that when they got back to the It was pretty quiet. Just ask Kim if her decision for tonight and tomorrow is already made. Jeff asked Kim what is more important loyalty or strategy. Kim tells Chef she thought she could play with her heart and her head separate but it’s been harder than she thought.

Jeff asks them if before they go to vote does anyone feel that they have to have one more word. Sabrina, Christina, Alicia and Sabrina feel they are all safe. Chelsie comments that tonight Kim has a chance to gain respect or lose respect.

14 person voted out of Survivor Alicia!

The four remaining ladies return back to camp.  Christina feels like she’s on the outs, but she still thinks that she might convince them to have her in the final three.

Sabrina goes and they have tree mail, Sabrina knows she has to win it today. Now she needs to pick it up and go full throttle.

The tree mail tells the ladies they have to go and burn the torches of the former contestants and once they finish they have to proceed to their final immunity challenge.

Now we are treated to a retrospective of those who failed to survive.  You know the story.  Colton admits that he behaved like a spoiled little bitch and that is why he got sick – God ejected him from Survivor…

Immunity Challenge 2:  the challenge is super difficult with a giant wire maze on a spring and the contestants must schlepp 10 bowls through the maze and stack them on top.  Looks like the hardest challenge this season for sure.  But the stakes are high!

Kim wins immunity OMG – she is really in the catbird seat now! Four times she has won individual immunity.  Kim has dominated this season in every respect and looks like the runaway favorite to win the game – but let’s see.  You never know until you know.

Christina wants to know the truth and she learns it – Kim tells her that she is going.  Crazy how much control Kim has – what was wrong with her opponents – did they think that a policy of appeasement would save them?

Final Tribal Council: Christina admits she’s going home. Jeff  implores Christina to defend herself and not just give up the ghost but there is no point.  When the MC has to fight your battles you are already dead.

Christina is voted out with by everyone – amazing she didn’t vote for herself to leave!!

The Final 3 Make Their Cases To The Jury

Chelsea’s Statement:  Kim is the reason she’s there but says her strategy was equal to Kim’s.  She says Kim is more likeable.

Kim’s Statement: She claims to be proud of all her decisions since they served her well and were strategically optimal.  She excuses her cruelty by saying ‘It’s a game.’

Sabrina’s Statement: She admits she let Kim and Chelsea do all the thinking. Claims she tried to stay quiet.  Plays the sympathy card by telling everyone she just got fired from teaching inner-city school children – like they care!

Jonas: He is pretty nice about the whole thing and does not have that much to say.

Christina: She makes Kim admit that she would have cote Chelsea out if she had not voted her out.

Jay:  Not really much to say either he just says Sabrina did not do much.

Mike: He says Kim should never have admitted to being the mastermind behind the blindsides.

Tarzan:  Does not have much to say either – except more or less saying how much he loved his wife.

Leif: Sabrina tells him that it was Kim’s idea to get rid of him.

Troyzan: Asked Kim if she was the mastermind who decided to get rid of her.  She admits it was.

Kat: She is still pissed.  She tells everyone she had open heart surgery and will have another soon.  She then tells them she will not vote out of anger.

THE WINNER OF SURVIVOR KIM

Tarzan – Jeff tells Tarzan he knows he saw this coming.  He wants to know what Tarzan’s thought was.  Tarzan tells him he had a plan, he used Colton as a shield.  He tells Jeff taking out Bill was not a mistake.  Jeff says so you knew what you were doing and Tarzan agrees yes.

Sabrina – Jeff asks how they talked the men into things.  She tells him maybe because they are women.

Troyzan – Jeff asked why he thinks it happen in this game.  He tells Jeff that most people playing fair. He doesn’t think they all knew the game that well and Kim was making him feel comfortable so that was okay. He says it is like  real life whatever makes you feel comfortable.

Kim – Jeff asked if Kim knew she was going to win and Kim says that when she watched after while she realize she was.

Jonah – Jeff asked what advice would you give to someone going to do Survivor.  He says he would tell people not to try to fly under the radar, make bold moves.

Colton – Jeff addresses the horrible racist comments Colton made.  Jeff ask Colton if he is embarrassed by what he said.  He agrees he is embarrassed – he sounds up very mean mean person on television.  he says the choice of playing in the game a nice southern bell or a bitch with teeth.  Jeff if Colton is who they saw on the show?  Colton says he is not and it was comfortable for his friends.  Just asks what it was like to go on the internet and see what people said about him.  Colton said well when he left people said it got boring.  But he was directly out of this comfort zone on Survivor.

Colton’s Mom – Jeff asks if it was embarrassing to see how Colton behaved.  She says they are not racist and that was not how Colton was raised and he is a good kid.  Martha tells Colton she loves him, but he has to remember that people have feelings, not matter how much money is up for grabs.

Mayim Bialik – She thinks Colton’s exit was too early because she would like to see him get his dues.

Colton apologizes to everyone, but I am not sure everyone is buying it!

Tarzan – Jeff asks him about being a plastic surgeon.  He tells him he is and he is retired and he was a good doctor and all his patients loved him.

Alicia – Jeff asks her about the comment she made about Kat being like one of her special needs students.  Alicia admits people were not happy with her comment.  She is also upset she said it, it came out wrong.

Kim, Tarzan, Troyzan and Chelsea came down to the running for the Sprint Best Player of the Season.

Bill – Although Colton told Bill to get a job, he got up in New York city and do standup and got a standing ovation.

For the 25th season Survivor is headed to The Philippines.

3 castaways who were airlifted out will return to go on three teams.  Survivor Philippines airs this fall 2012 and of course Celeb Dirty Laundry will be recapping it every week, because we are awesome!