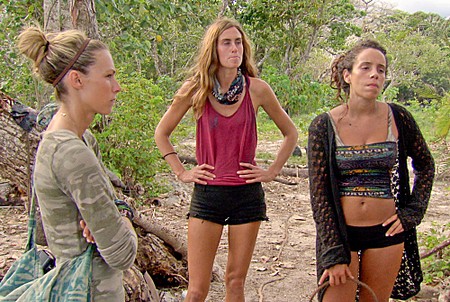 A brand new episode of Survivor: One World airs tonight on CBS and it is called “It’s Human Nature.” Tonight’s episode kicks off finale week, the ultimate survivor will be crowed on Sunday night!  Stay tuned as we live blog tonight’s episode with all the up-to-the-minute details.

On last week’s show there was a reward challenge where the contestant got to spend time with their significant other.  Two of the most poignant stories were Tarzan with his wife and Christina with her father who just had a kidney replacement.  Most of remaining contestants agreed if they won they would send the two of them off with their loved ones.

Kat won the challenge and rather than choose Tarzan or Christina she chose Kim and Alicia.  She said she wanted to party and get drunk.  The other contestants were shocked and saw her for a spoiled, selfish child.  At tribal council there was a lot of bitching back and forth at Kat because she did not take Tarzan on the reward challenge.  Sabrina said she was just a selfish 22 year old girl.  At the end her selfish decision cost her the game and she was blindsided and sent home.  If you missed the episode you can read our full and detailed recap here.

We are in finale week so we only have two more episodes left on Sunday – until the ultimate survivor is crowned. On tonight’s episode an unlikely betrayal within an alliance puts one castaway on the defense, while another tribe member concocts an elaborate story to gain an advantage in the game.

Tonight’s episode:  The girls are talking about how mad Kat probably is.  Tarzan is surprise if he was the girls he would’ve voted him off first and not Kat.  He is hopeful he may get into the top three. He never thought that would happen.  Tarzan decides to meet with Lisa and try to convince her that he should keep him in the final four.  Tarzan suggests that they get rid of Chelsie.

Alicia meets with Tarzan and and asked him if he thinks she can beat Lisa. Tarzan is really trying to play all angles of the game to ensure him a spot in the final three.

Chelsea is absolutely certain that Kim has her back. Chelsea is trying to real Christina and, she knows Christina is Alisha’s puppet. Chelsea is worried about Tarzan, she doesn’t think it’s a good idea to let both the final three. Because all the men who are on the jury are pissed at the men so if Tarzan is in the final three there will probably vote for him to win the game.

Christina goes blabs to Kim and Alisha and lesser-known that Chelsea is talking about them.

Reward Challenge: They’re going to run to a station with a disk and spin it to remove it then they move on to the next platform and spin another disk when they get through this they will use the disks as a decoder to solve puzzle. Once they solve the combination they raise their flag and win. The winner goes on a yacht to take a shower, get some fresh clothes they get a three course meal at sunset on the boat and get to sleep overnight.

Chelsea wins reward and chooses Sabrina to go with her and then Kim to with her.  Alicia, Tarzan and Christina head back to camp with nothing.

Kim looks about the sessions she needs to feel better. She needed their head. Meanwhile back at the camp Tarzan, Alicia and Christina are processed about what happened and who Chelsea took with her.  Alicia is starting to consider what Tarzan says.

Alicia tells Kim that person said you can come back from above changes her plan than they know she’s a traitor.  Kim realizes that Tarzan is making some progress with Alicia and she decides to totally manipulate Alicia and it is working. She convinces Alicia that Tarzan is playing everyone.

Immunity Challenge – Alicia wins immunity by a couple of seconds over Kim.  She will be in the final five.

Back at camp there was so much back and forth it was hard to follow.  All the women were manipulating and it looks like they have all decided they do not want to bring Tarzan to the final three at the end of the day.

13th person voted out and the 7th member of the jury is TARZAN!