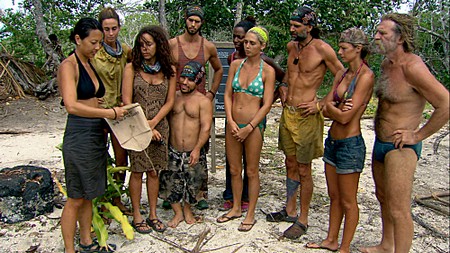 A brand new episode of Survivor: One World airs tonight on CBS and it is called ‘Go Out With a Bang.’ Stay tuned as we live blogging the episode with all the up-to-the-minute details.

On last week’s show Jeff asked the remaining tribe members who thought they are going home?  Much to my surprise not a single person put their hand up.  Everyone was confident – in a game like Survivor where you are expected to expect the unexpected it was a silly answer for the remaining castaways.

Kim manipulated the men once again on Survivor proving this cast of men are not the brightest lights in the forest.  She managed to convince them that Michael had to go.  Her evil plan worked and Michael was eliminated and clearly blindsided.  If you missed the episode you can read our full recap here!

One of the strangest moment from last week’s episode is when Tarzan took Chelsea aside and asked her if she did not like him because she had a bad experience with her plastic surgeon.  Tarzan is a plastic surgeon and he feels Chelsea resents him for that.  Implying she has a bad boob job!  She looked like she wanted to kill him LOL!

On tonight’s show 10 survivors remain and temptation is sweet for ravenous tribe members vying for individual immunity, and rumors of a hidden immunity idol send Tikiano into a tailspin as they head into Tribal Council.   Tonight we will find out if the women continue with their plan to vote the man off one at a time or will the men convince one of the women to vote with them.

Tonight’s recap: Tonight Show opens up with with the morning after the Tribal Council Jay tells the girls he thought he was about to get capped at Tribal. Tarzan takes Troyzan that aside and tells him that the girls are planning to knock them out one by one and  this because the men’s team has let himself fall apart. Troyzan tells Tarzan that there is immunity idol out there and if they can find it the men’s team can even things up.

Meanwhile Troyzan is not sure the women are lying to him and hasn’t told Tarzan he has the immunity idol.  But if he sees Kim and Chelsea doing something he does not like he can make a move.

They get Tree mail the tree mail – it says carry this back to your camp and don’t open it until all members of your tribe are together. Today they’re competing in a do-it-yourself reward challenge. The winning tribe will get a boat ride to a secluded island where they will be treated to a barbecue. The contestants drew for who will go on which team. The red team wins so Alisha, Kat,  Tarzan,  Jay and Troyzan get to go on a boat ride and get to have the barbeque.  Jay is a little suspicious that the girls are not being honest with him and he feels there is going to be a blindside coming and he hopes it isn’t him.

Kim is happy because Mike went out last night and the girls are ahead. Kim wants people to think that she’s quiet, soft-spoken she wants to just coast by and she doesn’t want anyone to know she is making the decisions. The girls were talking this morning and they decided that either Troyzan  or Jay will go home this week, whoever doesn’t win immunity. Chelsea is having a problem because she looked Troyzan and Jay in the eyes and told them she wasn’t going to vote for them and it is just not her to go back on her word.

Alisha is pissed off because Chelsea got all sensitive about voting off Troyzan and Jay –  because no one told her to make a deal with them. Kat squeals to Sabrina.  Chelsea is upset that they’re going to vote out Jay or Troyzan. Sabrina says that going to the end they have to make some big girl decisions that may have to put on their big girl panties if they want to go to the end with all women.  Toyzan and Jay talk and they believe that the women  have to vote at a woman to show them that they’re still on their team. Jay is letting Troyzan  think that he’s comfortable with going to the end with him. But Jay is not really comfortable with Troyzan because he is a strong player.  Jay talks to Kat and tells her that he wants to see it be either Christina or Alisha this week.  Then he tells her that he really think that Alisha should go.

Jay tells Kat to get confirmation – Kat really likes Jay but she realizes she has to think with her head and not with her heart. Jay asked the girls to promise that the order of elimination would be Alisha first and Christina second and the girls agreed to to the order.

Troyzan is worried that the girls will blindside them but Jay is confident that his girls won’t do that to him.  Troyzan just does not have a good feeling and knows he has to win immunity this week.

Immunity is back up for grabs-today’s immunity challenge is a survivor classic.  the contestants will stand on a bar with her hand upon the air if they drop their hand the barrel above them will drop water on them. The last man standing will win immunity. While the contestants are standing in the challenge Jeff will offer temptations to make them drop out.  Jeff offers anyone who will step out to cookies and a glass of milk. Sabrina decides to take the offer.

Next item to try to attempt the players three hamburgers a bowl of chips and a cold beer. Chelsea convinces Leif to step out of the challenge and assures him that he is safe if he does.  Chelsea gives Leif her word!  Chelsea wins immunity!

chemists throughout how the immunity challenge when she got to eat cupcakes and she didn’t have to show she was a strong player and a woman still one immunity. Chelsea realizes that Troyzan that is the biggest threat they have because he really wants to win the game.  Kim decides when they go to  Tribal council some of them will vote for Troyzan actually the majority and the rest will vote for Jay just in case Troyzan has the immunity idol.

Troyzan is  suspicious he  just does not believe what the women are saying so he is taking his immunity idol with him to Immunity Challenge. Trioyzan tells Jay he is bringing his immunity idol to Tribal Council and playing it and Jay does not want him to.  He has heard nothing to make himsuspicious.  Jay runs and tells Kim Troyzan is going to play his idol.

Jeff asked if anybody has the immunity idol and if they want to play it. Troy fans stands up and gives Jeff the immunity idol. He does not want to get voted out tonight. Any votes cast against Troyes and tonight will not count.

Ninth person voted out and the third member of the jury Jay.

Jay tells the remaining tribe members given that half the tribe members have their name written down tonight if there wasn’t a reason to be paranoid before there is now.

The END! Make sure to join us next week for our coverage of the next episode of Survivor: One World!