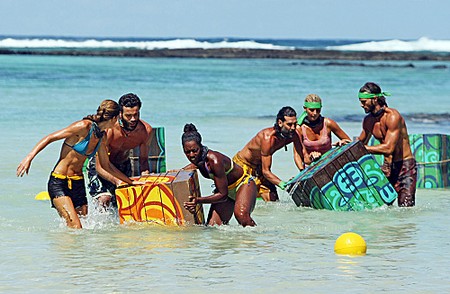 A brand new episode of Survivor: One World airs tonight on CBS and it is called ‘Just Annihilate Them.’ Stay tuned as we live blogging the episode with all the up-to-the-minute details.  On last week’s show the tribe decides that Jonas is too strong a player and they decided to get rid of him.

At tribal council Jonas Otsuji pleads his case to the tribe telling them it would be a mistake to get rid of him since he is the person that feeds them.  He tried to throw Michael under the bus and that does not ingratiate him with the tribe and the end up voting him out.  If you missed the show you can read our full recap here!

On tonight’s show the game gets personal when one tribe member is confronted about her physical appearance, and a shocking blindside eradicates any sense of security in the Tikiano tribe.

From the preview it looks like the women start to get organized and decide to ban together to pick the men off one at  time.  Kim is pushing for the girls to take over the game.  They are advertising the episode as the biggest survivor shocker yet.

We will be live blogging the show tonight at 8PM EST with all the exciting happens.  So don’t miss the recap, come and spend the evening with us!  Make sure to refresh often to get the most current updates!  While you wait for the recap to start you can check out  a sneak peek video of tonight’s episode  HERE!

Tonight’s Episode:  Troyzan is worried they may have made a mistake staying with the Selani team.  Jay is worried the women may be thinking of over powering them.  They go and get tree mail and there is a empty bottle of the un-cola seven-up and there is a message in the bottle.  It is time for reward challenge.

The survivors will be divided into 2 tribes – they do a school yard pick.  The castaways must slide down a water-slide and then run out to the water and unclip crates.  Once they have all 7 crates on the platform they must solve the puzzle.  The first team to solve the puzzle wins the challenge.  Tarzan sits out the challenge.

The winning team will be taken to a 7up oasis where they will enjoy steak, burgers, keylime pie and as much 7up as they can drink.

Jeff opens one bottle up so everyone can share – so they can get a taste of what they will win.

The teams are neck in neck – everyone wants to win. Jay, Cat ,Troyzan, Alicia and Jay are in the green team. Yellow tribe wins – Sabrina, Christina, Leif, Kim,Chelsea and Michael.

When the winners got to the 7up oasis they were shocked – it looked like a resort.  Kim is starting to talk strategy with the ladies she takes Alicia aside to talk to her.  She talks to the ladies about getting rid of Michael.  She hopes if she can get the 6 ladies together they can control the game.

Meanwhile back at the camp they are talking about next week and Cat suggest Mike too but Jay is not sure – he is worried that the women are going to gang up on them.

The yellow team returns back to the camp and brings a cooler filled with 7up.

It looks like a storm is coming – in the night it was rainy and windy and a part of the shelter blew off.  They need to build up the shelter.  Tarzan is pissing everyone off again because Chelsea think he took part of the wall off of the Survivor to burn.  Tarzan goes back at her and denies that that the bamboo he took is part of the shelter.  Tarzan took Chelsea aside and asked her if she did not like him because she had a bad experience with her plastic surgeon.  Tarzan is a plastic surgeon and he feels Chelsea resent him for that.

Kim takes Troyzan aside and tells him that Michael is telling people that Troyzan is going to win the game.  She it totally lying this is her plan to get another man out.  She tells Troyzan they should vote Michael out. Troyzan totally falls for it.

Immunity Challenge:  Race across a ladder bridge while they maneuvers bags of puzzle pieces,  If they fall they have to go back to the beginning.  The first four through get to go to the finals.  The four survivors make a puzzle from the puzzle pieces and the one who wins gets immunity.  The winner is assured a 1/10 shot at the million dollars.

First through Jay, Troyzan Alicia and Kim move through to the finals.  They are 60 pieces to the puzzle they have to make.  Kim and Lisa are ahead and Troyzan is a close third.  Jay is dead last he is going slow but he wants to be careful.  Kim and Lisa race through and find they put pieces in the wrong place.  Troyzan as well.  Jay starts to catch up – can he win it?

Jay who was dead last – wins immunity!  Kim is playing both her alliances against each other Kim has an alliance with Selani her old team and with the girls.  She is keeping her options open but she thinks making and alliance with the girls and getting of Michael is the answer.

Chelsea asks Jay if he would send Michael home.  Jay is shocked that Chelsea was in his alliance and starts to realize that maybe his Selani alliance is gone.  Kim is worried that everything is going to explode and she goes to try and do damage control.  Kim walks over to the men and tells them she wants to vote Christina out.  Jay is suspicious, but Michael thinks his alliance is still on.

Kim tells the ladies that if they vote Michael out then the game is going to change and there is going to be a major uproar.  Kim tells Sabrina and Chelsea they have to make their minds up whether they stay with Selani or whether they form an alliance all women.

Tribal Council – Jonas is there he is the first member of the jury.  Jeff asks the remaining tribe members who thinks they are going home tonight?  No one puts their hands up.  Everyone agrees if they are voted out tonight they would be blindsided.

MICHAEL is voted out and clearly he was blindsided.  Kim’s plan worked and now the women will certainly vote the men off one at a time!