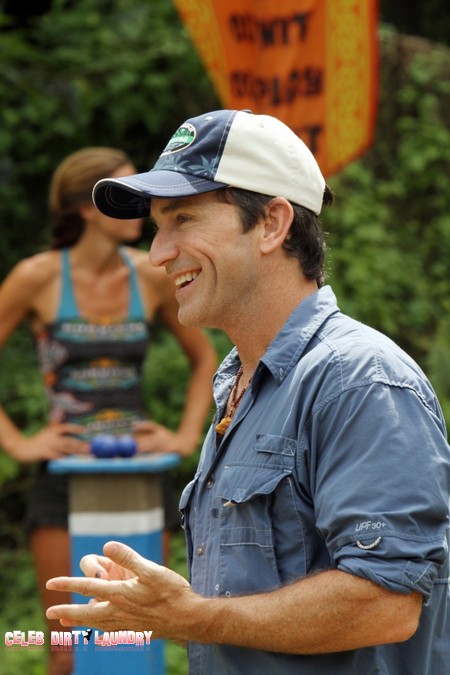 A brand new episode of Survivor: One World airs tonight on CBS and it is called ‘The Beauty in a Merge.’   Stay tuned as we live blogging the episode with all the up-to-the-minute details.  On last week’s show Colton starts the show being as obnoxious as ever.  The show starts with Colton having extreme pain – he goes for a walk and lands on the ground in pain.  Christina comes upon him and goes to get the medical team.

The medics determine that they have to take him out of the camp and bring him to hospital. Once they take him out – he is out of the game. Jeff tells him he can give his idol to someone – but Colton being Colton decides to keep it as a souvenir and Alicia is pissed.  At the time it was believed Colton had acute appendicitis but it has since been found out he had a  bacterial infection.  At tribal council last week no one was eliminated. Jeff told everyone ‘it is going to get complicated’ and then he told everyone to drop their buffs – they are merged.  They are now one tribe!  If you missed the episode you can read our official recap HERE!

On tonight’s show – we are about to find out what Survivor is like without evil villain Colton.  According to the official synopsis of the show allegiances are thrown into question when one tribe member makes a bold move at tribal council.  From the preview we saw last week of tonight’s episode it looks like Tarzan is in trouble – but because they are being so obvious about it – I  believe they may not be in case.

TONIGHT’S EPISODE:  The tribe members celebrate with a feast – Alicia feels that Colton screwed her over and considers going back to the ladies as an alliance. The castaways decided to name their new tribe TIKIANO.   Although it is a one man team Selani is looking to vote out the other team one at a time.  Tarzan was hoping the men would be solid against the girls but Tarzan now realizes that is not the case.  Tarzan tries to convince Michael to create and alliance with the men.  He thinks Alicia will come to their side and be the deciding vote.

The castaways come for the reward challenge.  For today’s challenge ONLY they are going to be divided into 2 tribes.  The contestants must dig for 4 bags of puzzle pieces.  Once they gets all the bags of puzzle pieces they must bring them to two tribe members who will solve the puzzle.  The winning team of the challenge gets an afternoon of Pizza and beer and a note..  The tribe members will be divided into random teams.

The teams are neck and neck with the forth bag of puzzle pieces – we have a race.  it is down to making the puzzle to find the winner.  Tarzan and Jonas working on the puzzle for the blue team.  Troyzan and Christina for the orange team.  The orange team wins reward!  Christina, Sabrina, Troyzan, Alicia, Chelsea get to enjoy the pizza and beer.

They get a note that says open when you finished eating.    The note tells them there is another immunity idol hidden at the camp.

Back at the camp – Jonas meets with Michael and says they have to get together.  Michael tells Jonas that there is already a plan for the men to get together.  Jonas is pissed he thinks Tarzan is a loose cannon.  Jonas goes to see Tarzan and tells him he made a mistake blabbing – he also tells Tarzan he is fed up with his bullshit.  Tarzan tells Jonas that there is so much confusion he is dropping out of the tribe and he is out of the alliance.  Tarzan tells Jonas he does not like him and he is willing to fall on the sword.  Tarzan says he can only play the game for so long and then it gets irritating.

The tribe members head to the immunity challenge.  Individual immunity is now what the contestants seek – it is up for grabs.

In today’s challenge the tribe members are perched on a small log while balancing a ball on a wooden disk at regular intervals they will add balls if anyone drops a ball or falls off the perch they will lose.  The last person standing wins.

After 20 days someone will be voted out tonight!

Troyzan is really happy that he won immunity –   Selani is trying to keep the team together.  They decide to they want to dump Jonas because he is the strongest player right now.   Troyzan thinks it is a dumb idea because Jonas feeds them.  Troyzan goes and tells Jonas what they are planning.  Jonas goes over to apologize to Tarzan and Tarzan is happy.

Troyzan, Jonas, Tarzan decide they want Kat to go.  Jonas knows it is his only hope.  Chelsea tries to convince Jay to keep Jonas and Kat and vote out Tarzan.

Tribal Council: Jonas tells Jeff that it is critical to be thinking of the end now – but he is shocked that people want to vote him out – he cooks for people.  Jonas says Michael would be better to vote off.  Jonas tells everyone he is voting for Michael tonight.  Tarzan is upset at Jonas – he does not feel he had to do throw Michael under the bus.  Then Jonas tells everyone at Tribal Council that Tarzan wants to vote Kat out.

Tarzan gets totally pissed off at Jonas and tells Jonas that he is going to vote him out tonight.  Sabrina and Chelsea admit that Tarzan is more difficult to deal with than Jonas.  Tarzan admits to everyone he works in an operating room and is in charge of the operating room and he finds it difficult to see the disorganization.

Chelsea thinks they are people you want to keep around because they are positive and there are other people who are dead weight.  Tarzan now feels that the plan they had is falling apart but he is voting for Jonas.

Jonas is voted out and he is the first member of the jury.

Jonas give them a parting shot and tells them good luck with the food situation!