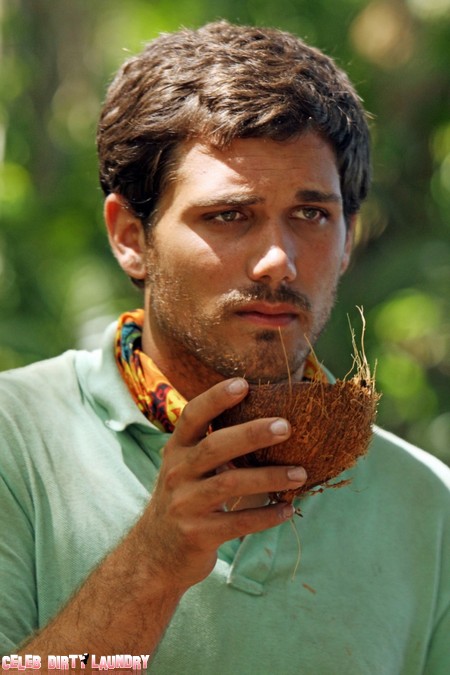 A brand new episode of Survivor: One World airs tonight on CBS and it is called ‘Thanks For The Souvenir.’    Stay tuned as we live blogging the episode with all the up-to-the-minute details.  On last week’s show Colton’s the puppet master’s reign of terror continued.  I have decided that this season the players are the worst I have ever seen.

How can they continue to be fooled by Colton?  I was sure when they switched up the teams last week Colton would lose his control – I was wrong.  Colton was not pleased with his new team and had this to say about them: “It is very hard to be the leader of a bunch of idiots.” A typical Colton snide remark.

On last week’s episode Colton managed to convince his tribe to blindside Monica and she was sent home.  If you missed the episode you can read our full recap here!    After they voted Monica off Jeff admitted he did not understand their game play because they voted out their strongest player.  Jeff said Interesting – what he meant was MORONS!!

On this week’s show extreme pain threatens to derail one castaway’s chances of staying in the game when medical is called in to evaluate the situation.  A conspiratorial Tribal Council once again shakes things up.  I am so hoping it means Colton is going!  Crossing my fingers!

Over at Salani Tribe they had a hard night – it was very cold.  The tribe members received tree mail and they are going to have a reward challenge for something sweet.   Salani is excited to see who Manono voted out at tribal council.  They are shocked Monica was eliminated.  Reward challenge – they will be climbing on crates and throwing coconuts at targets.  The first team to knock 4 targets out wins the challenge.

Reward – They will be going to a Survivor Ice Cream parlour  for the afternoon and they will be able to eat ice cream until their tummy’s hurt.  SELANI wins the ice cream reward.  Selani heads out for their reward.

Selani is excited to be at the Ice Cream parlor.   They have their choice of ice cream and toppings.  The tribe members are so excited because this is their third win in a row.  Getting away from the camp has re energized them.

Meanwhile at Manono Colton is taunting Christina and telling her she only has 2 more days to be in the camp and then she is going home.  Jonas is not pleased that Colton and Alicia are being so mean to Christina.  Christina goes to talk to Leif and Jonas and lets them know she is aware she is going home but she wants them to think about the fact that if there is a merge Alicia will go with the ladies.  Strategically it would be better to keep her because she has no alliances.  Alicia was behind her listening to her and she tells Christina she has dug her own grave and she sucks at playing the game.

Christina and Alicia get into a bickering match.  Colton gets a headache he says his brain felt like it was attached to his skull.  Christina tries to help Colton and massage his head.  Colton knows that Christina is trying to save herself.   Jonas and Tarzan gets some bread fruit for the tribe.   Tarzan comes to see Colton and tells him he is dehydrated and he needs to drink some water.  Tarzan suspects he may be having an appendicitis attack. He goes for a walk and lands on the ground.  Christina comes upon him and goes to get the medical team.

The medics determine that they have to take him out of the camp and bring him to hospital. Once they take him out – he is out of the game. Jeff tells him he can give his idol to someone.

The medical team comes over and Colton explains to them what is happening. The medic examines him and feels it may be appendicitis. Alicia is worried that Colton will be taken out of the game. Colton decides to keep the immunity idol as a souvenir. Alicia is totally pissed and think he is selfish because he kept the idol.

Jonas thinks that now that Colton is gone he will have more power and he is reconsidering his earlier intention of voting Christina out. He thinks that perhaps getting rid of Alicia is a better decision because she has an alliance with the women.

They get tree mail and they learn both tribes are going to tribal council. Everyone is very nervous. Everyone is speculating what is going to happen.

Tribal Council – Jeff catches everyone up with why they are there.   Jeff lets everyone know Colton had acute appendicitis and was operated on.  Troyzon feels sad for Colton.  Alicia lets Sabrina know that Colton took the immunity idol with him.  Not everyone believes her – Troyzon does not believe it.  Kat is so dumb she did not even know what an appendix is.

Jeff tells everyone it is going to get complicated and then he tells everyone  to drop their buffs – they are merged.  They are now one tribe, 12 people fighting for 1 million dollars.  It is now an individual game.  Tarzan says the game is afoot.   Jeff tells them to take a moment to celebrate and then get their head back in the game.

No one is eliminated!