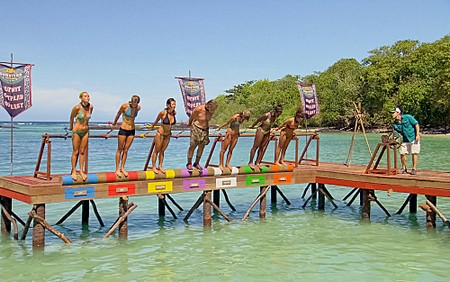 A brand new episode of Survivor: One World airs tonight on CBS and it is called “It’s Gonna Be Chaos.” Stay tuned as we live blogging the episode with all the up-to-the-minute details.

On last week’s show Troyzan tried to save himself by messing with Kat’s head.  He should have realized that would not work, Kat does not look like she has much going on in her head LOL….  Meanwhile Kim was nervous because she thought Troyzan had the immunity idol.  So Kim came up with a plan to split the vote just in case.  Troyzan got wind of what they were doing and tried to use it to his advantage, but at the end he failed and he was voted out.  If you missed the episode you can read our recap here.

On tonight’s episode called ‘It’s Gonna Be Chaos’  walls come down when the Tikiano tribe shares an emotional moment with their loved ones, and one castaway’s decision creates animosity amongst wounded tribe members.  Remaining in the game is one man, Tarzan and six women, so it is a women’s game.  The remaining castaways are: Kat Edorsson; Kim Spradlin; Christina Cha; Greg Smith; Chelsea Meissner; Sabrina Thomson and Alicia Rose

From the preview it looks like the ladies all think they are running the game.  It should be interesting this week at the end of  tribal council last week before Troyzan left he whispered something in Kat’s ear.  I wonder if that will make Kat play the game any different?

They get tree mail and there’s something in there that says Sprint.  The girls are really excited in the boxes of phone and there’s messages from their families on the phone.  They realize their families are on the island with them.  The castaways had to see Jeff-there is a reward challenge.   Jeff brings out the castaways family members.

The winner of reward challenge will get to spend time with their relative.  Kat won the challenge and she gets to and him away from her.  Kat gets to choose two people to go with her on the challenge – she choose Kim and Alicia.

Kim thought it was a selfish decision for Kat to make not to take Tarzan and Christina and thinks she will have to do damage control when she gets back to camp.

Everyone is pissed off because it is obvious that Tarzan really needed to see his wife. It is also clear that Christina needed time with her father who just had a kidney transplant. Yet Kat decided to take two people so she could go drinking and get drunk.

When Kat, Alicia and Kim get back to camp from the challenge their a bunch of pissed off people and they all want to vote Kat off next.  Kim is not sure that is a good decision,  Alicia one Sabrina to go next.

Immunity Challenge, they have to hang on while they stand on a pole the person who last the longest will win immunity. The first of the challenge is Sabrina, then Tarzan, then Alicia, Chelsie is next, Christina is next, Kat falls out of the challenge.  Kim wins her second immunity.

Kat is being so arrogant she wants Sabrina gone and she is laughing because she says she controls the game.  Alicia realizes that after the immunity challenge she saw how hard Kat worked and realize it would be better to get rid of her.  Kim does not really agree with Alicia she thinks Sabrina is smarter than Kat.

There is a lot of bitching back and forth at Kim because she did not take Tarzan on the reward challenge.  Sabrina says she is just a selfish 22 year old girl.  Tarzan says he is not mad at her.

Kat is eliminated and sent home – she is blindsided.  Her mouth was hanging open and she is totally pissed and starts crying as she walks away.