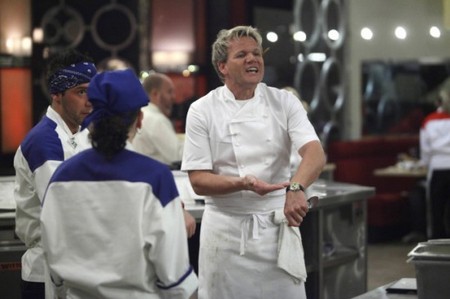 Tonight on FOX is an all new episode of Hell’s Kitchen. On tonight’s show it’s steak night in HELL’S KITCHEN and the 11 remaining chefs are determined to impress Gordon Ramsay If you missed top 12 Chef’s competing, we have a full and detailed recap here for you.

On last week’s episode of Hell’s Kitchen, the 12 chefs battled it out in front of special guests, Tito Ortiz and Sugar Ray Leonard who offered inspiration to the contestants.

The women won the challenge and got to go to a spa for reward, the men readied both kitchens for dinner service, but first, they had to clean both dorms. The women were also surprised with a gift, some really expensive cookware.

Chef Ramsay caught Tiffany put a knife to her lips and then touch the food with it, disgusting. Roshni had problems at the meat station, some of the Wellingtons were raw and some overcooked; this was a bigger mistake than she thought as she ended up being sent home.

Tonight the show continues when the contestants compete at Gordon Ramsay Steak at Paris Las Vegas. We all know how Chef Ramsay likes to add some tension for the contestants and tonight to stir things up he has a slot machine that is used to determine the ingredients in the dishes.

RECAP: Chef Ramsay tells Christina that she is amazing before she leaves the kitchen with the other chefs. The women are confident that they are going to take the lead into the final. Clemenza is thrilled that he was saved for another week, but I have a feeling he’s not going to make it much further.

Kimmie decides to try and cheer everyone up with a rap that she created, but she falls flat and doesn’t impress.

The next day, they chefs walk into the kitchen to find something covered by a huge gold sheet.  Chef Ramsay decides to bring a little bit of Vegas to the contestants by testing their creativity, the slot machine will decide what ingredients they are going to use. Red team has to put one person out because they have too many people on their team, Kimmie volunteers to sit out.

Kimmie didn’t participate, but Chef Ramsay wants to taste her steak and it’s delicious, he tells the women they made a bad choice in letting her not be a part of the challenge.

The blue team are going shopping at “sur la table” and dining at one of the best restaurants in LA, “Comme Ca”. The red team has to receive the beef that will be arriving for the next day’s dinner service, as well as prep the kitchen.

The men enjoy the spoils of victory while the women are pissed as they cut up the enormous side of beef.

The women are all bickering and clearly not happy when the men walk in from the enjoyable day away from the kitchen.

Today is steak night in Hells Kitchen and both teams want the win. On the red team, Tiffany cuts the onions thick and when Barbie notices, Tiffany gets upset and starts throwing insults. Justin’s filet mignon is on the menu because Chef Ramsay was so impressed and it’s family night, so there are going to be a lot of children in Hells Kitchen.

Kimmie burns her hand really bad and Clemenza scrambles to get her a medic. Kimmie has suffered very serious burns and the medic immediately tell her that she is not returning to the kitchen.