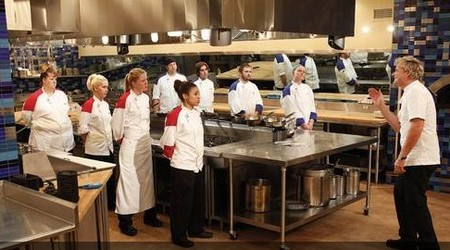 Tonight on FOX is an all new episode of Hell’s Kitchen. On tonight’s show it’s a continuation of steak night in HELL’S KITCHEN and the 11 remaining chefs are competing to impress Gordon Ramsay If you missed part 1 last night, we have a full and detailed recap here for you.

On last night’s episode, Chef Ramsay decided to bring a little bit of Vegas to the contestants by testing their creativity with a slot machine that decided which ingredients they had to use in the challenge. The red team had to put one person out because they had too many people on their team, Kimmie volunteered to sit out because nobody would step forward. In the end, the blue team won and Chef Ramsay decided to taste Kimmie’s dish even though she didn’t participate, he loved it, which only made her even angrier that she had to back out.

The men enjoyed an day of shopping at “sur la table” and dining at one of the best restaurants in LA, “Comme Ca”. The red team had to receive the beef for the next day’s dinner service, as well as prep the kitchen. The men enjoyed the spoils of victory while the women were pissed as they cut up the enormous side of beef.

Tonight the show continues with “family night” when the chefs continue to compete to remain in the competition. Being a “family friendly” night, the chefs, as well as Chef Ramsay, find themselves having a hard time keeping their cool as tempers flare. The chefs will be focusing more on the drama than cooking in the kitchen, which spells “disaster”. Stay tuned to find out which chefs lose their cool and which chefs have their eye on the prize and not the drama.

RECAP: The continuation from last night starts with Kimmie’s injury, she burned her hand in two places and it doesn’t take long for her to get back in the kitchen. Meanwhile Robyn acts like such a witch and calls Kimmie a cry baby.

It’s family night and as a special treat each child will get a mini pizza appetizer. Tiffany is slow on the red team with the pizzas and doesn’t care because as she says it, “I hate kids anyway”.  Barbie steps up to save Tiffany’s pizza station and as usual, Tiffany is unthankful  and rude. Tiffany screws up the bellini and Barbie has to step up again to save the service.

In the blue kitchen, Patrick has to re-fire his rib eye because they were sent back undercooked.

Robyn in the red kitchen is having serious problems, first she screws up the steak and then the fish; it’s going from bad to worse for her and Chef Ramsay is losing it.

Meanwhile, Patrick is also failing tonight and Chef Ramsay is all over him, after blowing it three times, he is thrown out of the kitchen.

Justin came to the rescue on the blue team and orders start going out. Robyn is sinking deeper every minute, but somehow entrees start leaving the kitchen.

Chef Ramsay is counting on Royce to keep up the pace on the grill and he fails, it was too good to be true, Ramsay throws Royce out of the kitchen as well. The remaining members of the blue team push to finish dinner service.

Robyn and Kimmie are still going at it, if they served as much food as attitude; the service would be finished.  Dana thinks her team is like an anchor on ship, they are just going down. Tiffany starts to lose is it as well and screams at Barbie, Chef Ramsay puts the blue team in the red kitchen to help because the women have lost it. Robyn is swearing and one of the men even has to remind her that there are children in the kitchen.

The red team’s steak is cold at the pass and Chef Ramsay throws them out of the kitchen.

Robyn tries to throw Kimmie under the bus and all hell breaks lose, Dana can’t stand it because they all sound so ghetto. Dana can’t believe that Kimmie and Robyn used to be BFF’s and now they are arch rivals.

Back in the kitchen, it’s up to the men to finish the service and they do.

Chef Ramsay calls the red team and the blue team into the kitchen and tells them that there are no winning teams tonight, both teams are losers and have to nominate two people each for eviction.

It’s getting ugly in the kitchen, Kimmie and Robyn almost come to blows.

Chef Ramsay is back, it’s time to find out who is going to get nominated. The men nominate Royce and Patrick. The women nominate Tiffany and Robyn. Tiffany is desperate and doesn’t want to leave, even though she deserves it, she calls Robyn useless and tells Chef Ramsay to send her home. Robyn turns around and tears into Kimmie and then tells Chef Ramsay that she is constantly saving Kimmie.

Chef Ramsay sends Tiffany and Royce back in line, he sends Patrick home. I can’t believe it, I don’t think I have ever been this shocked by an elimination in any season of Hell’s Kitchen. Chef Ramsay then sends Robyn over to the blue team.