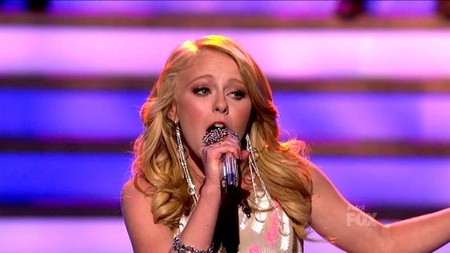 Hollie Cavanagh performed  “Faithfully”  by Journey tonight on American Idol the Top 4 California Dreamin’ night.  Did you miss tonight’s episode?  If you did we watched it and we recapped it here for you.  On last week’s show Skylar Laine was sent home.   If you missed the show you can read our full and detailed recap here.  If you missed any of the performances from last week you can see them here.

The contestants remaining in the competition are: Phillip Phillips; Jessica Sanchez;  Joshua Ledet and Hollie Cavanagh.  Hollie Cavanagh got axed during the “green mile” in season 10, but not this season, she is rocking it! Hollie sings “Faithfully” by Journey.

Judges Comments: Randy: “I am so amazed, you came back and you’ve been slaying us every week, you did Journey proud. Dude, you were right in the zone, Hollie wants to take this sing, she wants the whole thing Dawg”. Jennifer: “It makes me feel a little emotional, seeing how much you have grown, I’ve been waiting to see you sing and it was really very beautiful”. Steven: “I watched you two years ago, you have blossomed and you are so creative, your choice of song was over the top, just beautiful”.