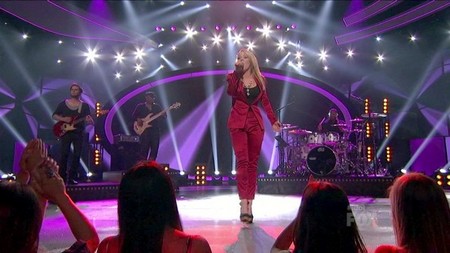 ROUND 2 – Hollie Cavanagh performed “I cant make you love me” by Bonnie Rait tonight on American Idol the Top 4 California Dreamin’ night.  Did you miss tonight’s episode?  If you did we watched it and we recapped it here for you.  On last week’s show Skylar Laine was sent home.   If you missed the show you can read our full and detailed recap here.  If you missed any of the performances from last week you can see them here.

The contestants remaining in the competition are: Phillip Phillips; Jessica Sanchez;  Joshua Ledet and Hollie Cavanagh.

Hollie Cavanagh is confident and she chooses to sing one of her favorite songs, “I Can’t Make You Laugh Me” By Bonnie Raitt. Jimmy does not want Hollie to over sing this; when she is in the song, she can pull it off and she has to do magnificent tonight.

Judges Comments: Randy: “It’s a great song, but it was wrong for you, you need things that are going to give you a moment, it didn’t do it for me”. Jennifer: “It’s easier to sing this kind of song when you have had your heart broken, but you are trying to make everyone love you – there was too much shaking in your vocals. I felt it could have been your best performance, but it didn’t happen for me”. Steven: “This song is all about how you can feel the song and I found it fell short.