Hollywood Hookup: Luke Perry and Jennie Garth Are So In Love! 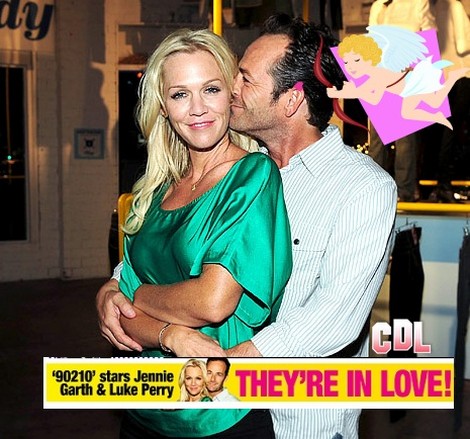 Fans of the original Beverly Hills 90210 will remember Jennie Garth and Luke Perry being paired up as one of the show’s power couples and it looks like that teenage chemistry onscreen has turned into something real 20 years later. The latest issue of The National Enquirer is claiming in their new cover story that not only are Jennie and Luke hooking up, but it has turned to love.

Jennie is finding her way through one of the hardest years of her life, as her husband of 11 years, Peter Facinelli, left her back in February.  The actress has taken some time to refocus her priorities and to help her three daughters to adjust to life with just mom. She shot a short lived reality show, Jennie Garth- a Little Bit Country which actually documented those first few weeks of life on a farm in the middle of nowhere, without her husband. Since then the star has dropped 20 pounds and dipped her toe back into the dating pool again.

She teamed up with Luke Perry to do an Old Navy commercial and while making the publicity rounds together they have been spotted getting touchy feely with him even nuzzling her neck.  Jennie has said that Luke has become her best friend in the last several months and has really helped her through the rough days.  That makes sense as he himself went through a tricky divorce back in 2003, so he would understand exactly how she feels and what she needs.  We all know that good friends often turn into lovers and Jennie and Luke have always had some sizzling chemistry. Now they also have kids around the same ages and many similar adult experiences to bond them as well!

Do you like Jennie and Luke as a couple?  Do you think that onscreen magic from years ago can actually morph into a real life love affair?  Tell us your thoughts in the comments below!