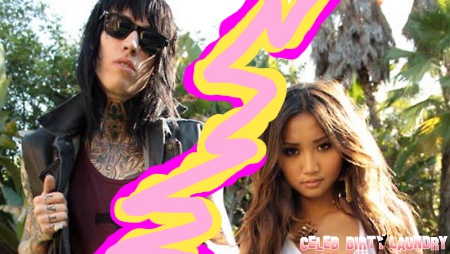 Just as singer/actress Miley Cyrus celebrates her joyous engagement to Liam Hemsworth, Miley’s brother, Trace Cyrus, calls it quits with Brenda Song. As is so frequent in Hollywood, this relationship has undergone the fizzle-fizzle-it’s-done-done dance, and the couple recently announced that they’re officially — and publicly — over for good.

“Brenda and I have decided to go our separate ways,” Cyrus, 23, tells People in a statement. “We split up a couple of months ago. We will continue to focus on our careers.”

The couple got engaged last October and, not long after, decided that they would take time to focus on their careers — like, for example, reclaiming nearly non-existent ones. He says further:  “I wish Brenda the best and much success in the future. I hope everyone can respect our privacy about this situation.”

They seem pretty lackadaisical about the whole split, which makes me wonder if this whole little “romance” was just another Hollywood Hookup formed to try and generate some attention: two C-listers coming together to make a B+ lister. What do you all think? There’s so much ridiculousity  in the land of celebrity romance . . . sometimes my little ginger brain just can’t handle it!

Unfortunately for you, sir, I won’t be able to respect your privacy until you tell me what caused this out-of-nowhere split. I always thought you two made an extremely strange couple and knew you were doomed from the start. Now that I know my original hypothesis was correct, I’d like to know the reason for the split. Don’t make me call Miley, sir — because I have a feeling Miley would be super smiley to dish out the dirt on her crazy older bro.

Please, commence the speculation . . . . Why have these two hopped aboard the train to Splitsville?