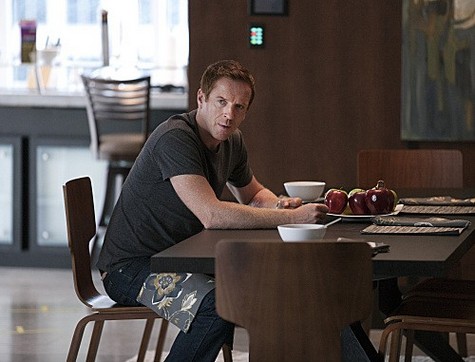 Tonight on Showtime is a whole new episode of HOMELAND. On tonight’s episode called “The Motherf**ker with a Turban” On tonight’s show Carrie’s hunt for Nazir continues, but she suspects something’s amiss inside the Agency, while interrogation reveals Roya’s true colors. Did you watch last week’s show? We have a sneak peek it here for you!

On last week’s show Carrie’s car was found crashed, but no Carrie. Was she off on a mental bender or had Nazir picked her up to try and blackmail Brody into pressing on with the mission? Nazir had to know about her – he’s got great intel – so I wouldn’t be surprised if he had picked her up. I also wouldn’t be surprised if she’s flaked out because Brody’s headed back to her family.  With Carrie, the good thing was, these two are not mutually exclusive. She could be kidnapped by terrorists and crumbling about her weird relationship with Brody simultaneously. She’s been too stable for too long, she’s due for a little mental break.

Tonight’s episode will answer or further torment us with these questions: With Walden gone is Estes’ job at the CIA safe? Is Saul going to make it out of interrogation with body, soul and job intact? Will anyone realize Brody had something to do with Walden’s death? They’ll know he was there, but will they see him as implicated.

Tonight’s episode is going to be another action packed one, which you won’t want to miss. So be sure to tune in for our live coverage of Showtimes’ Homeland Season 2 Episode 11 — tonight at 10PM EST! While you wait for our recap, hit the comments and let us know what you think of Homeland season 2, so far and check out the sneak peek video below!

Tonight’s episode recap: It’s dark, Carrie is wondering around in a warehouse and once outside, she finds that the place is surrounded. Carrie wants to go back in to get Nazie, she went in just after she called Saul and she escaped, she really needs a medic. Quinn tells her that Walden died, he had a heart attack.

Nicholas can’t sleep, neither can Jessica who spoke to Cynthia and was happy that Nicholas was with her husband when he died. Cynthia thinks everything has changed, she wonders how they even got there.  Nicholas has a phone call, it’s Carrie and Jessica is not impressed that he takes the call.

Saul is getting polygraphed and he doesn’t like it, he calls the test a farce but Estes wants him to take it. Saul is asked questions about Eileen Morgan’s death and says flat out that he didn’t kill her.

Carrie is pissed that Nazir got away and she thinks it is an inside job and she pieces together that Galvez could be involved, after all he is a Muslim. They take chase after Galvez but he is the only one in his car and claims he was leaving because his stitches opened up, he was heading to the hospital.

The next morning, Nicholas is having breakfast with the kids and Dana is upset that she can’t go to school, that she cannot g out. Jessica walks in, she went and got milk. Dana loses and tells Nicholas that he should just leave and go live with that cray woman and that they were much better off with Mike, at least he was a better father figure.

Back at the station, Carrie takes a break to go wash her face. Estes is there, he gets called to the polygraph room.

Carrie is interrogating Roya and gets her to break down, she asks Carrie if she ever had anyone take from her life and make her do things that really were not her, that were wrong, but you can’t help yourself. Roya starts screaming at her and tells her that she is not stupid and maybe Nazir is afraid of her, but she is not.

Estes is happy that the polygraph went well, he’s got enough to fire Saul if he wants to.

Carrie was on her way home, when she calls Quinn because something Roya said bothered her that Nazir didn’t run – she thinks he is still in the tunnels.

Carrie is back inside the caves, but this time she has armed protection from the FBI with her. Carrie is right, Nazir was there but no more. Carrie is convinced that he is not far away. Nazir is there, he attacks the armed FBI agent that was with Carrie, he is dead, he then goes after her. All of a sudden. Nazir grabs Carrie from behind and slams her into something. Nazir goes to sit in the middle of a room, the armed FBI agents come in and he has this insane look on his face, he reaches into his pocket and they shoot him dead.

Estes tells Quinn that the Brody family is going to get moved back to their house now. The family finds out and Nicholas is having trouble with the news, he starts crying and the kids are wondering why. The family is safe now, they can all go home, the children are absolutely thrilled. Once they arrive at the house, Jessica goes over and says goodbye to Major Mendez. Nicholas can’t get out of the car, Jessica gets back in and tells him that she doesn’t want to fight anymore, she is tired of fighting. She goes on to tell him that they were ok for so long, all they wanted to do is be together since they were 16. She asks him if it was Mike and he says no. Jessica wonders if it is because she couldn’t give him what he needed when he got back. Nicholas tells her that it is him, it was being in Iraq that did it. Nicholas goes on about the crazy things that Carrie told her and Dana but Jessica says she doesn’t want to know anything any more. Jessica knows that Carrie knows everything about him and she accepts it, she tells him that he must love her a lot. Nicholas asks her what should they tell the kids and she tells him nothing that they don’t already know.

Carrie is finally home, the doorbell rings and it is Nicholas at the door. She tells him that Nazir is dead and can’t hurt anyone anymore.