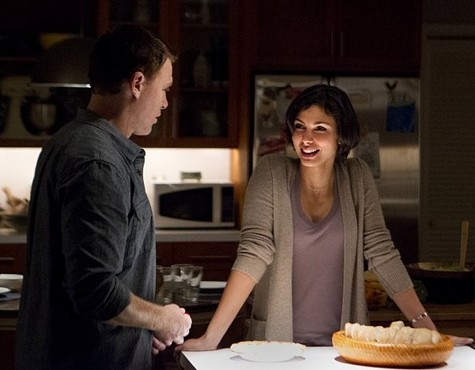 This week on Showtime’s drama/thriller Homeland, Claire Danes and Damian Lewis fans received more of the tortured relationship between their characters CIA agent Carrie Mathison and Marine Sgt. Nicholas Brody respectively. Though the relationship has been a bit raw since he reported their relationship to her boss causing her to lose her job and sanity, the two meet up this week for a passionate and painful moment.

Brody, in an attempt to better his relationship with Vice President William Walden (played by veteran actor Jamey Sheridan, goes on a weekend get away with Walden and potential wealthy campaign supporters. As part of Brody’s deal with the CIA, he is continuing his plan to become Walden’s vice presidential running mate when Walden runs for top office. This is what terrorist Abu Nazir has instructed Brody to do in the hopes that Brody can influence foreign policy in his favor.

And if spending the weekend talking politics with a group of uptight rich guys wasn’t bad enough, Brody’s daughter Dana, played by actress Morgan Saylor, chooses this time to confess the joy ride with Walden’s son that resulted in the hit and run death of a woman. In typical political fashion Walden and his wife react with gags for anyone and everyone tied to the crime, an upsetting reality for Brody, his wife, (actress Morena Baccarin)  and his daughter. But if Brody wants to keep his deal with the CIA he cannot do anything to rock the boat with Walden.

This week on Homeland fans can expect the further mental breakdown of double agent Brody. The pressure is building for the disgraced soldier and playing both sides takes it’s toll as he slips his surveillance team with Mathison’s assistance. With fellow terrorist Roya Hamma, the CIA, his family, and his political ties pulling him in every direction Brody is hurtling towards what will surely be a climactic and satisfying end.