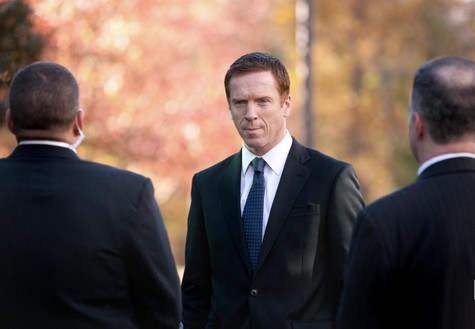 Now that Abu Nazir is dead, is Brody expendable? In the season finale preview, Brody and Carrie discuss a future together with a clean slate and all the mess behind them. Now that Jessica’s called it quits on the marriage (I prefer her with Mike anyway), there aren’t any obstacles in the way, right?

Spoiler alert: If you’re one of those people who doesn’t like spoilers, stop reading now! We have some juicy spoilers for you about the season 2 FINALE of Showtime’s “Homeland”

Oh yeah – there’s that pesky death threat. As Carrie and Brody make plans and love, Quinn watches. Is he just waiting on a clean kill shot? Now that Nazir is dead, Carrie doesn’t need to be running Brody, so why is she running her hands all over his body?

Brody knows, she knows, Saul knows – heck we all know – she was never running him – she was in deep with him all the way. Crazy chick! Saul tells Carrie flat out the she can’t be with him, but she’s fighting for her man. She insists that Brody has never broken a promise to them. I do agree that a soldier who was tortured for his country shouldn’t just be put down like a bad dog…

Carrie and Brody are steaming up the windows and we see Quinn on the hunt, rifle in hand. Saul says there’s an assassination afoot. With Walden dead, is someone after the President? He can’t be talking about Brody – technically he’s still a public figure, so I guess you could call his death an assassination, but it sounds bigger.

Brody’s getting photos taken for new IDs – are they going to let him go – really give him a new life. The stack of cash and documents say yes, but Estes wanting him gone says no to me! Carrie fights with Saul over her relationship with Brody and gets bitchy – she tells Saul she doesn’t want to be alone like him. Saul tells her that she is both the smartest and dumbest person he knows.

We see Abu Nazir’s body wrapped in white cloth, sliding off a navy ship into the sea a’ la Osama bin Laden’s end. We see Quinn looking through the rifle scope and there seems to be some other players at work. Who will live, who will die?

Join us here next Sunday at 10 pm to find out exactly what happens on the Season 2 finale of Homeland for a live recap!