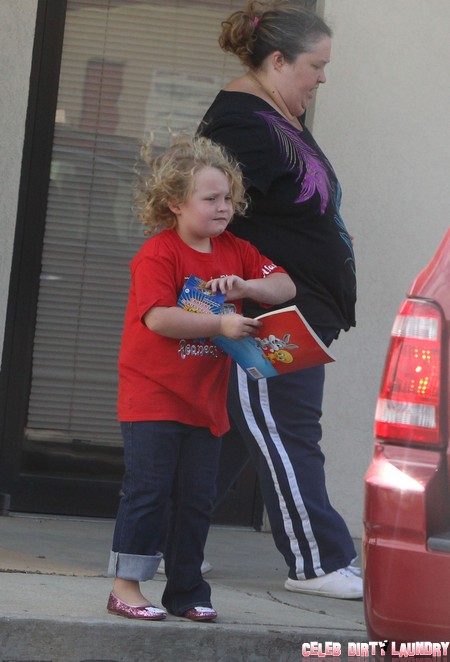 So here’s a nice cliched situation for you on this Monday morning.  Anna Shannon, the oldest sister of Here Comes Honey Boo Boo breakout star, Alana Thompson, has a one month old named Kaitlyn and apparently paternity is an issue. Anna’s ex-boyfriend strongly believes that he’s the daddy but the hillbilly family is not only refusing to let him see the child, but they are also avoiding a DNA test as well.

Caleb Clark has opted to do what any father looking for answers would do, he reached out to The National Enquirer (rather than pay for a DNA test) to spill the beans and no doubt profit from the redneck dilemma. Caleb also says that Anna confessed to him in a letter that she screwed around with someone else and that guy could very well be the father!

(Anna told him) “I kinda had sex with someone the week before we did, but I trusted him to wear a condom, but I don’t think he did, and that’s what scares me,” Anna wrote. She then said she wasn’t sure if the baby she was carrying was his. “I lost all trust in her after that and broke up with her,” Caleb said. “But in my heart, I am still sure that baby is mine. My dad walked out on me and my mom when I was a baby and I was adopted (by his stepfather). I don’t want her to be one of those people whose mommy tells them, ‘Your daddy wasn’t there for you.  All I want is to know for sure that she is mine, and to do what is right for my baby. Kaitlyn is my daugh­ter – I believe that with all my heart,” Caleb in­sisted.

Ok, I get that maybe this kid really does want to know the truth and maybe his intentions are even in the right place – but why go to The Enquirer when we all know Maury Povich will pay for your DNA testing and hope that you are NOT the daddy!  Here’s why, Caleb knows that this family is a goldmine right now. They have surpassed the Kardashian’s in popularity because let’s face it, middle America would rather see 300 pound people dumpster dive than 100 pound girls shop in Beverly Hills. If Caleb isn’t getting what he wants then he knows how to get even, just talk to the press!

Do you even care who Anna’s baby daddy is? It sure sounds like she doesn’t! We’d like to hear how June Thompson, Mama Boo Boo, weighs in on the whole mess. Tell us your thoughts in the comments below!