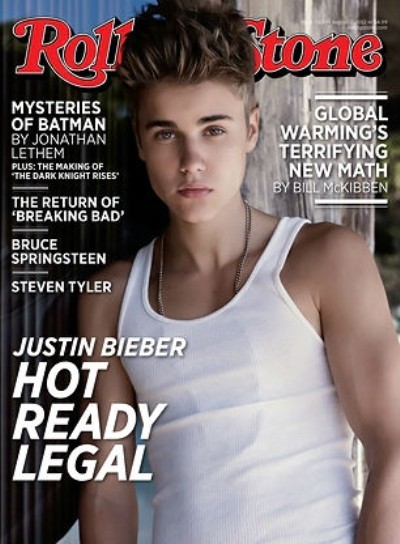 Justin Bieber is on the cover of Rolling Stone magazine in a wife beater and long chain posing harder than Victoria Beckham at a Vogue party. The 18-year-old pop star flexes his muscles for dear life and, to his obvious delight, even manages to pop a vein out for the camera. With the headline, “Hot Ready Legal” Justin is continuing his quest to convince the world he’s more than just a baby-faced teenage wonder and ready to break out of his pretty boy facade.

He tells the magazine all about his maturation since his last album. “I feel like I carry myself in a more manly way. I don’t carry myself as a boy.”

What does that even mean? This is the second time the Biebs has covered the magazine. He looked slightly less ridiculous in the February 2011 edition. Justin Bieber’s sex life with girlfriend, Selena Gomez, was a hot topic in that one. He famously said, “I don’t think you should have sex with anyone unless you love them. I think you should just wait for the person you’re… in love with.”

A.K.A. I’m having lots of sex. So far it doesn’t look like he mentions Selena in the newest article although his manager, Scooter Braun, addresses the concerns that Bieber’s relationship with Selena lessens his appeal to his younger fans. “Personally, I think that’s all a bunch of bullshit,” Braun said. “Yes, there’s gonna be some girls that if they see him with a girlfriend, it kills the dream – but there’s also gonna be girls that see him with a girlfriend, hear about the romantic things he does and want him even more.”

Braun even talks about the date the two went on where Bieber borrowed an empty Staples Center for the night, arranged a candlelight dinner and watched Titanic on the Jumbotron. “I have 30-year-old female friends who heard about that and said, ‘Justin Bieber is the most romantic dude on the planet,'” Braun said. “I’m in love with this boy.

Sorry, I just threw up in my mouth. But if you like Bieber than you probably think that’s cute. To each his own. I wonder when the interview took place – was it before or after the break up tweet? Braun seems pretty intent on selling the Bieber and Selena romance here.

What do you think of the cover? His hair needs to get restyled. I can’t handle how high it is. Other than that, I’ve got no major issues. It’s almost like he’s channeling Mark Wahlberg in his Marky Mark days. Sorry to break it to you Bieber, but you’ve got a long way to go if you want me to get excited to see you in your underwear.