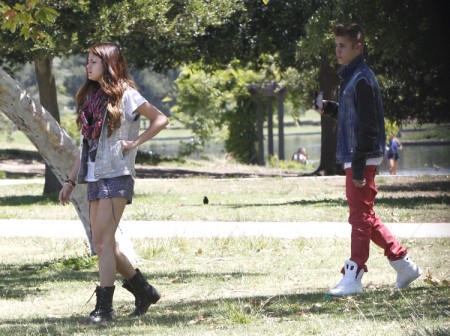 Justin Bieber and Selena Gomez’s break-ups shouldn’t come as a shock to anyone since the singer tweeted (and denied) his intention to fly the coop just last month.

TMZ revealed earlier today that the baby-faced couple has been breaking up and getting back together over the past few months and just recently as last week called it quits. The website wrote, “They’re not ‘solid’ … they’re just figuring things out.”

That makes that mysterious “anonymous” twitter signaling the couple’s demise in mid May not so mysterious after all. Naturally, Justin claimed that his twitter account was hacked. The tweet read, “thank you for the time i had with you but i have to move on now..”. It was deleted right after. Justin’s manager, Scooter Braun, even came out in the relationship’s defense. He later called the tweet “fake” and assured everyone that Justin “never tweeted that.” Rule Number 1: when managers actually respond to break up rumors, there’s usually a break up happening (hello Tom Cruise/Katie Holmes, Heidi Klum/Seal, and Katy Perry/Russell Brand).

Of course he tweeted that! He was clearly sulking, got caught, then took it down right away like a little biotch! This is all around the time Justin lost his temper with a paparazzo while he and Selena were out on a date. Remember, the photographer complained to police about upper torso pain because Justin unleashed his Mike Tyson-like rage on him? I’m not defending the paaparazzo but he wasn’t doing anything Justin wasn’t used to. Could Justin have taken out his Selena frustrations on the ill-placed photog?

The relationship has seemed to be strained of late. The couple have been spending a lot of time apart thanks to their busy schedules. Were these small incidences the beginning of the end for Jelena? Do you still think the twitter was a fake or are you starting to Beliebe the couple has been on shaky ground for longer than they are willing to admit?