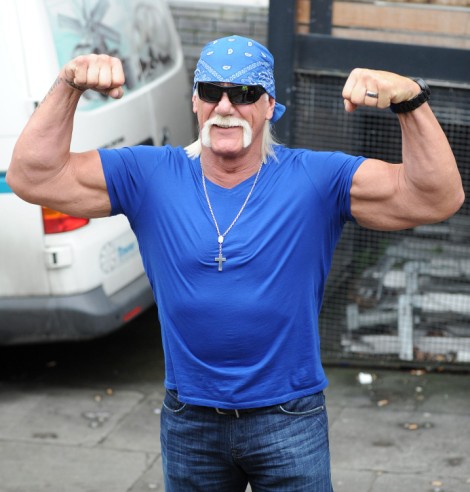 I’m not one to get excited about sex tapes but there’s something about Hulk Hogan that pulls me in every time. Maybe it’s the fact I grew up watching him on Wrestlemania. Maybe it’s the fact he was in Rocky III. Maybe it’s because he hasn’t aged in 20 years. I just don’t know for sure. But I do know if you have an extra minute today and you want to waste time and giggle then you should check out a snippet of the Hulk Hogan and Heather Clem sex tape. It’s a little grainy but it’s also a little hilarious.

TMZ was one of the first to report that a sex tape was getting shopped featuring the Hulk but no one knew for sure who he was co-starring with. The guys at Gawker got the full 30 minute tape last week via an anonymous source. Gawker said the source didn’t ask for payment or credit, just that they watch. And watch they did. The woman rumored to be banging the Hulk is Heather Clem, ex-wife of Hogan’s best friend, famous radio DJ, Bubba the Love Sponge. I think Bubba’s voice even makes a cameo in the tape, right before Hulk and Heather get down to business. Obviously the dudes have no problem sharing.

Back when news of the tape first surfaced, Hulk was apparently lawyering up because he said he never approved of the filming. I buy that. He’s definitely not putting on a show and the Hulk is nothing if not a showman. All he can talk about after he’s finished with Clem is that he’s a fat pig for eating too much beforehand. I doubt he’d have been so down on his weight if he knew he was going to enjoy the tape in the future. So who set up the Hulk? Was it Clem? Was it Bubba? Who do I have to thank? Because it really is loads of fun – and I just saw one minute of it.

First, you get to see Hulk’s enviably ass cheek tan. Then you get to check out his nasty hair line without his do-rag firmly in place. And THEN before all the sex and blow jobs you witness how much Hogan loves his son. You don’t believe me? Check it out. I actually feel bad for his son, Nick Hogan. I’d hate to be in my dad’s thoughts seconds before he gets down to business with some slag. Maybe I should feel bad for Hogan’s wife too. I have no idea when the sex tape was made but he got remarried in 2010 so I sure hope the dates don’t overlap.

So, I’m not going to ask you if you’re surprised Hulk Hogan has a sex tape. I’m just surprised it took so long to leak. But who would betray him? Do you feel a little bad for the Hulk? Usually it’s the chicks who don’t know they’re being filmed!