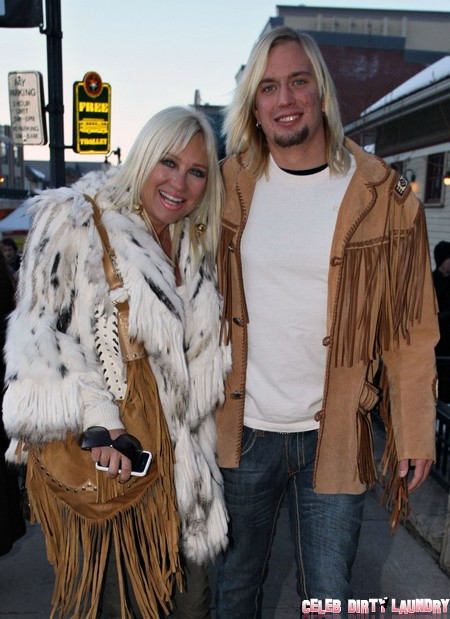 Linda Bollea – Hulk Hogan’s ex – was popped for driving drunk in Malibu in the wee hours of Thursday morning. Her blood alcohol level was rumored to have been .084 – just above California’s .08 legal limit – showing that one Hogan at least, does not know best.

One news source reported Bollea’s license had been suspended, but her rep maintains that’s not true. Also not clear is whether her much younger boyfriend Charley Hill was strapped into his child safety seat in her car or had been left at home with a sitter.

Linda and her rep offered several explanations that defy logic, if not science. Here’s the excuses offered by Linda and her lawyer and why they don’t hold water:

Improbability #1 They offered up that the former Mrs. Hogan was taking medication for a recent bout with e coli. Nice of her to offer the straight poop on having digestive issues, but antibiotics don’t have magical alcohol increasing properties. Alcohol decreases the effectiveness of the antibiotic by increasing the excretion rate of the drug.

Now what antibiotics can do is make you dizzy and erratic when combined with alcohol. That could only explain what tipped the cops off, but wouldn’t alter the results of a breath test. Unless she’s been prescribed Jack Daniels to treat the illness, drunk is drunk and penicillin has nothing to do with it…

Improbability #2 Her rep also said that Linda had a single glass of champagne on an “empty stomach.” There’s a great website – rupissed.com – that allows you to enter height, body weight, alcohol consumed and it estimates your blood alcohol level. Linda Bollea’s 5’9” – I was generous with weight at 120 pounds.

What’s more probable is that the revelation of ex-husband’s Hulk’s sex tape was stressful and she was guzzling booze in disbelief. This is just a scenario I’m theorizing, not an allegation. If you’ve seen the NSFW clip of the Hulkster’s sex tape you may have been (like me) both nauseated and intrigued.

The pervie peeper is rumored to be his best friend Bubba the Sponge and the brunette Bubba’s ex-wife. After the man leaves the room, the sex romp rolls on, but it’s awkward and less than hot.

One thing I have to say for Hulk Hogan in this sex tape mess – he maintains he didn’t know he was being taped. Unlike Kim Kardashian making love to the camera as much to Ray J, Hulk’s footage is shot from a stationary camera placed well above the tableau, out of his line of sight.

The footage looks like what you would see shot from a security camera at the 7/11. I do think he was taped secretly – and the perpetrator seems more intent on humiliating Hogan than profiting. Why else release the full content to media outlets and encourage them to release it?

If this is what Linda had to do in bed with Hulk every night, I’m surprised she wasn’t drinking more heavily before now! This has to be a huge embarrassment and if it was me, hitting the open bar at a party to try to wash the memory and taste of it away is understandable. Bollea is no doubt embarrassed also on behalf of her children – this has to be a stressful time.

That, much more so than antibiotics and an empty stomach, explains what happened to the former Mrs. Hogan in the wee hours of the morning in Malibu…