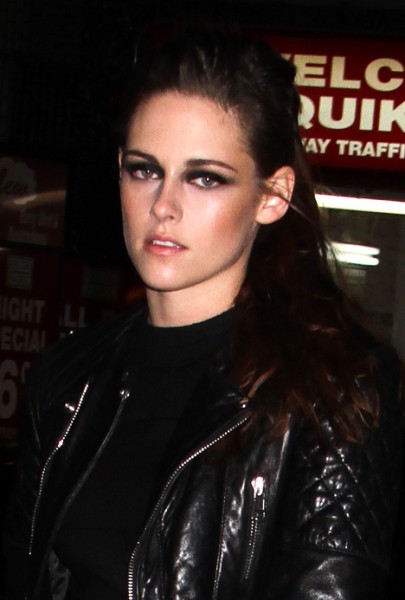 Oh but Kristen Stewart has been doing so well! She’s been promoting two movies, looking moderately happy (or as happy as she ever does) and even answering awkward but totally necessary questions about her relationship with Robert Pattinson. I’d almost forgot about Rupert Sanders (almost but not really).

But in a recent interview she just had to talk Fifty Shades of Grey. It’s like that amazing quote from Clueless when Cher says: “Sometimes you have to show a little skin. This reminds boys of being naked, and then they think of sex.” That’s my analogy for Kristen Stewart and Fifty Shades of Grey. She talks about sex and I think about her and Rupert Sanders in the Mini Cooper.

Now is it fair that Kristen can’t talk about sex for the rest of her life because my dirty, immature mind reverts back to her momentary indiscretion with Rupert? Not at all! But it is what it is. Get over it. It doesn’t help that she allegedly buys sex toys in Japan either.

In more important news, how do you think she looked last night while out in NYC? She looks so amazing in black. I would kill for that jacket! I’m sure in person I would think she has the body of a little girl but she photographs so well. I’m jealous today, very jealous of the clothes and shoes and I’m not even a shoe person!