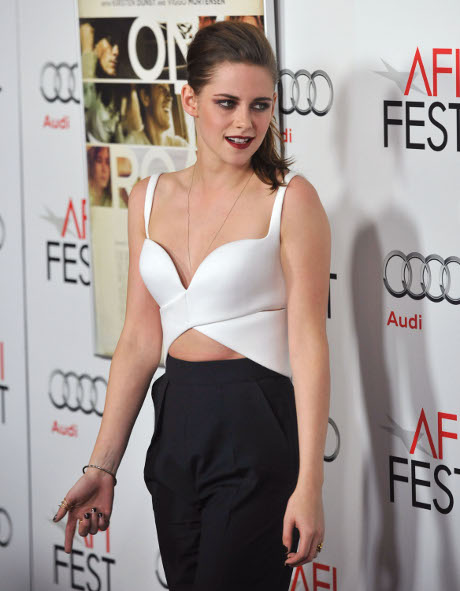 Kristen Stewart, for the most part, seems to have made amends with Robert Pattinson. But I suppose she will have to continue proving herself to him, and show him that she can be a faithful girlfriend — just like he (or so we think) — was a faithful boyfriend. So what is Kristen doing to keep her romantic life spicy with R-Pattz? Buying Japanese sex toys, of course!

Last night, Kristen appeared on The Tonight Show with Jay Leno and talked about all sorts of things, including her recent adventure to Japan, during which she helped promote her soon-to-be-released movie Twilight Breaking Dawn – Part 2.

“What are you going to miss most about playing Bella,” asked Jay. “None of it,” she said jokingly. She said there’s a particular energy that follows her around, and now she says that will be gone forever as this epic franchise comes to a close.

Jay asks her where she can go to get away from all the screaming fans, to which she awkwardly responded, “I like driving!” Jay prodded further, asking her if there’s like a place or somewhere, like the countryside or a different country entirely, where she can venture to  find a little peace and quiet. But it doesn’t sound like there are many places where one of the world’s most recognized actresses can go to get some space . . . except for maybe Japan.

“I just got back from Tokyo where it’s an entirely different way,” she said. “You know, people recognize you and maybe they come up to you but stand five feet away. I really dig that.”

When asked about the creepy Halloween mask she purchased, Kristen said: “I was in a store that sold absolutely everything you can possibly imagine. There were masks next to really weird sex toys next to, like, fish-flavored Tootsie Rolls. I bought it all!”

What do you think of Kristen Stewart now that she’s back with Robert? Let us know in the comments section below!