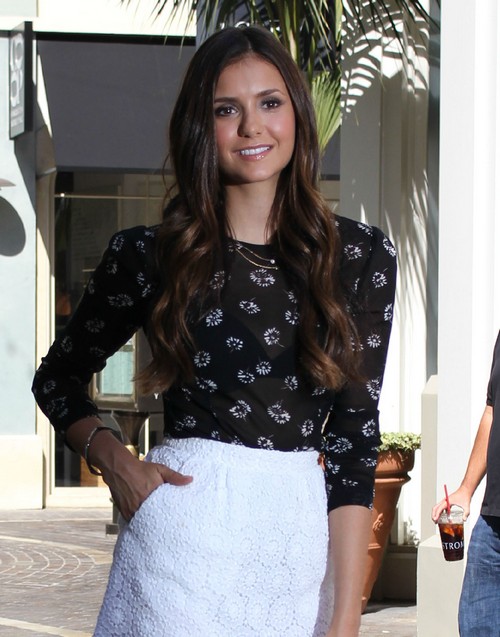 Taking an onscreen romance off screen, a la Kristen Stewart and Robert Pattinson, complicates everything. Vampire Diaries stars Nina Dobrev and Ian Somerhalder translated two seasons of on screen pent up sexual energy into a smoldering affair that was finally confirmed by Nina in her interview as Seventeen covergirl. But the new twists on Vampire Diaries may be costing their personal lives. Despite having tons in common—Nina is always happy to volunteer with Ian to raise money for his environmental foundation—Ian has left Nina! At least, for a little while. The couple have been filming Vampire Diaries all fall, but yesterday Ian tweeted that he is headed to London.

“Modern man . . . look at the size of this wing! London, here I come!” the hunk sent, attached with a picture taken out the window of the plane, showing the wing. On Sunday, Nina tweeted, “It’s official . . . winter is here, and I’ve got the flu. Deathly sick . . . So sick I haven’t been able to tweet : (“ Then this morning she sent, “still bed ridden. Not feeling too Hott. Well.. Technically I have a fever so I am hot. But you know what I mean . . .” We don’t know what Ian is doing in London, but it had better be pretty important if he has abandoned his vampire lover in her hour of need! The couple is normally inseparable, clinging to each other at Coachella, raising money for shelter animals and green energy, and serving pizza together in Louisiana at his family’s pizza parlor.

We know that Ian is known to brush elbows with some of the most influential people in the world—including the current president of the United States. Ian is a huge advocate for green energy, habitat protection and conservation, and fighting animal cruelty. Maybe he’s set off to London to talk with newly pregnant Prince William and Kate Middleton about how to reduce the size of their baby’s carbon footprint? Do you think Ian should ditch the UK and fly back to Nina, or can she suffer the flu alone while her boyfriend is having a fabulous time abroad?