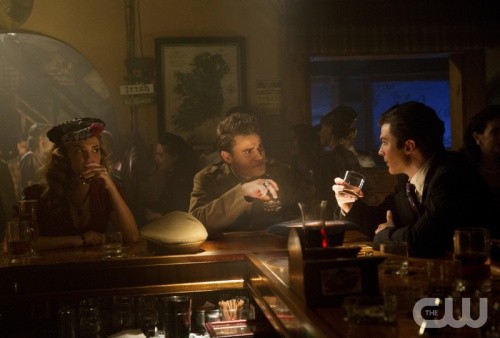 This week’s vampire diaries was fantastic as usual and left us wanting more.  From the preview we have seen, next week’s episode of The Vampire Diaries is going to be great and, as always, you can count on us to provide you with the juiciest, bloodiest, most magical previews and teasers out there. Continue reading to sink your fangs into next week’s episode, and don’t forget to watch the promo video we have for you below as well.

On tonight’s show it was a crazy one faced paced and so much happened.  Stefan was desperate to have a cure for Elena and Elena soon found out that Stefan was ready to sacrifice Jeremy to get that cure.  He made Jeremy kill vampires to get his map to grow.  But making Jeremy kill had other terrible consequences.  Damon continued to be very suspicious of Professor Shane and as we learn at the end of the show with good reason. Hayley spent a lot of time at the Mystic Falls pageant chatting Professor Shane up and Tyler was a bit suspicious.  But she laughed his suspicions off.  By the end of the show we found out Hayley is working with Professor Shane.

Caroline found out that Elena is attracted to Damon and she was far from pleased.  As a matter of fact she was astonished by the news.  By the end of the episode Caroline and Stefan came to a startling conclusion.  If you missed tonight’s show you can read a full and detailed recap here!

Spoiler alert: If you’re one of those people who doesn’t like spoilers, stop reading now! We have some juicy spoilers for you about the season 4 episode 6 of CW’s “The Vampires Diary.”

Official CW synopsis of next week’s episode: A FLASHBACK TO NEW ORLEANS IN 1942 — When Stefan ({Paul Wesley) confronts Damon (Ian Somerhalder) with a suspicion about Elena (Nina Dobrev), Damon has no choice but to help Stefan investigate. Searching for answers, Damon and Stefan visit modern day New Orleans to see if they can find anyone who remembers the events of their last visit in 1942, including one of Damon’s former flames, Charlotte (guest star Madeline Zima). Elena, Caroline (Candice Accola) and Bonnie (Kat Graham) share a girls’ night while the Salvatore brothers are out of town, and emotions run high when Elena delivers some shocking news. At Hayley’s (guest star Phoebe Tonkin) urging, Tyler (Michael Trevino) confronts one of Klaus’ hybrids, Kimberly (guest star Alyssa Diaz), and the situation quickly escalates into violence. Finally, Damon is faced with a heartbreaking decision. Jesse Warn directed the episode written by Charlie Charbonneau & Jose Molina (#408).

As we mention about Stefan is suspicious that Damon knew about Elena being sired to him.  He says to Damon, “She was sired to her, and you took full advantage of that.!” as we see a scene with Elena and Damon in bed.  Damon asks Stefan if he is doing what is best for Elena or what is best for him.  Then on the screen we see flashed, “To buy the hatchet, they’ll dig up the past.”  Damon and Stefan are forced to go back in the past to meet a former flame of Damon’s, Charlotte.  Back home in Mystic Falls, Elena, Caroline and Bonnie have a girls’ night in, but some bad news from Elena puts a damper on the evening.

The question at this point is whether Professor Atticus Shane is good or evil?  I am leaning towards evil, but I am not sure.  We do know he is is cahoots with Hayley and he wants all the hybrids to be un-sired.  We also know he had something to do with Pastor Young and the explosion.  What do you think is Professor Shane good or evil?

The Vampire Diaries Season 4, Episode 8 “We’ll Always Have Bourbon Street” airs on the CW on December 6th, 2012. Check out the preview video and some photos from episode 6 and let us know in the comments below what you think!