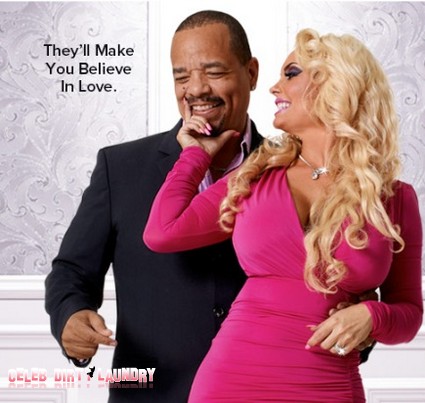 Tonight is the second night of a 2-night premiere event for the second season of Ice Loves Coco.  Stay tuned as we live blog the show tonight with all the up-to-the-minute details.  On last night’s show Coco was devastated when she learned it was not safe for her to have a baby.  Coco finds out she has high blood pressure and it just would not be safe for her to carry a baby at the moment.

She is told to eliminate stress and improve her diet.  Coco truly wants a baby so if that is what it will take she will do it.  If you missed last night’s show you can read our official recap here!

Ice-T and Coco are a unconventional couple but I love watching them together, they are so obviously in love.  What did you think of last night’s show?  Are you enjoying Ice loves Coco as much as I am?  Sound out in the comments below!

On tonight’s show Ice & Coco start looking for a new house but have different ideas of what makes a home.  When Coco started to look for a house Ice-T was not really into it – but finally he gets the bug and finds a crib in New Jersey which Coco is not crazy about.   She does not feel the WOW factor!   Soulgee is threatened when Coco’s best friend from high school comes to town.

We will be live blogging the show with all the up-to-the-minute details at 10:30 PM EST so make sure to come back to this spot and watch the show with us.  While you wait for the recap you can watch a sneak peek video of the episode below!

RECAP: Coco has a passion for fabric softner, she tells Ice that she puts about five in the dryer at once. He takes a sheet and rubs it all over her head and Coco loves it.

Coco’s shoe racks are taking over their condo along with her clothes. Ice thinks she has the biggest closet ever and doesn’t like that the condo is starting to look ghetto. Her suggestion is to get a bigger house, more square footage, they don’t even have a spare bedroom.

Coco is at work, she is working out her upcoming schedule but tells Soulgee to leave time for to spend with her best friend, Kyle who is coming to visit.

Ice and Coco go visit a house with the realtor to the stars, it has six bedrooms and he finds it too big. It has a six car garage, but when not using it for cars, it is a full service basketball court. Coco heads to the closet and she is in love, it has chandeliers in it. Ice is convinced that she lost her mind.

Ice doesn’t love the first house, he finds it too big, two people don’t need that much space. Coco is trying on a dress for a Dysfunctional magazine and Kyle arrives.

Coco’s stylist, Soulgee had her trying on a black dress that makes her look elegant and Kyle walks right in and tells her that it is terrible and gets her to try on a green dress that he thinks makes her look like a pinup girl. She picks the green dress and her stylists’ feelings are hurt.

The next day, Ice is playing a video game and Coco tells him that she was thinking about the house that he liked, but she doesn’t think that is it, she just doesn’t love it – in her heart it’s just not where they should be. Ice is giving up his search, he tells her they will just stay at the condo then.

Coco is out for drinks with Kyle and Soulgee. She tells them that she and Ice are stopping to look at houses. The three of them head to the dance floor, but Coco finds that it is more of a competition between the two guys.

Coco goes under the radar and contacts a friend who is a real estate agent and has an amazing house that hasn’t even gone on the market yet.

Once the two get over the initial shock, the house is not completed. But the good news, they can design it however they like and the two are extremely excited.

Coco is at work and tells her Soulgee that she wants him to get a long with Kyle but he is moving to New York.

Ice and Coco toast over champagne, they put an offer on the house and it was accepted.

That’s it for tonight, what did you think? I love the show, the chemistry between Ice and Coco is infectious.