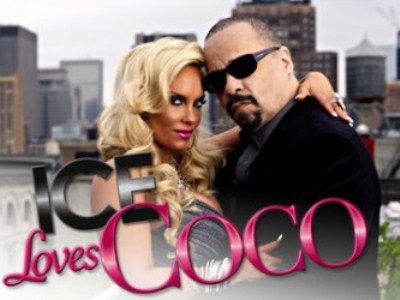 Tonight is the fourth episode of the second season of Ice Loves Coco and its called ‘Baby Got Backseat Drive.’  Since rapper-turned-actor Ice-T exchanged vows with voluptuous swimsuit model Coco in 2001, the two have been inseparable. Now this infamous Hollywood couple is in their second season of opening up their home for the world to see as they focus on starting a family and exploring new business ventures both together and apart.

Stay tuned as we live blog the show tonight with all the up-to-the-minute details.  On the last episode, Ice & Coco went on a mini vacation when Ice’s friend Marc stopped by for a little too long and became a ‘third wheel’ which Coco was less than thrilled about. If you missed the episode you can read our full official recap HERE.

On this week’s episode Ice struggles to join Coco on her new diet. Coco’s motherly instincts kick in while teaching Soulgee to drive, she tells him to just forget about all the little buttons. On Soulgee’s first driving lesson, Coco takes him to an empty parking lot, a parking lot is like training wheels. Coco tells him that it is very, very simple, but Soulgee is really nervous. Soulgee near misses some ducks, runs a stop sign through an intersection, in front of a police car. Soulgee can’t take the stress and bails out of the car leaving Coco alone.

The episode looks fun, so don’t forget to to stop by we will be live blogging the show with all the up-to-the-minute details at 10:30 PM EST so make sure to come back to this spot and watch the show with us.

RECAP: Ice is watching himself on his own show and asks Coco if he frowns too much on tv. Ice is snacking on cereal and Twinkies, Coco heads to his secret drawer and finds lots of junk food.

The next day, Coco is boxing, she finds it really reduces her stress and since she was diagnosed with high blood pressure the doctor told her to find something that reduced her stress. When they leave, Soulgee asks her if she can teach him how to drive.

At dinner, Coco and Ice are out with Spartacus. Coco reveals that Soulgee asked her to show him how to drive. Ice is against it and he learned how to drive by himself so he doesn’t understand how Soulgee can’t do the same. Coco tells Ice that she is thinking of going to a Nutritionist to help her with eating.

Coco and Soulgee are headed to the Nutritionist, she offers them Kale chips. Coco tells her that her blood pressure was 170/100 and she has a bad diet of junk food and sweets. The new strategy will be to pack her house with things she needs to eat, the house needs an intervention.

Back at home, Coco tells Ice they need to get rid of the junk food and he tells her to just not eat it. Ice is reluctant, but he ends up agreeing with Coco to throw the stuff out because he wants to support her, but not with a smile on his face.

Soulgee is in the driver’s seat, Coco tells him not to worry about all the little buttons. They are in a parking lot which Coco thinks is the same thing as training wheels. There are ducks around and Coco tells him to pretend they are people and not hit them. Soulgee runs a stop sign in front of a cop, he gets out of the car, he’s too stressed and feels if the situation was real he may have just killed a whole bunch of people.

Coco and Ice are at an organic store and Ice is disgusted with the choices. They head to the cereal isle and Coco thinks Ice will be excited, but he is not. Ice sees ‘stuffed grape leaves’ and he says he didn’t even know grapes had leaves.

Soulgee agreed to continue with the driving lessons, but only if a professional teaches him. He begins his lesson with his instructor sitting in the passenger seat, Coco jumps in the back of the car and makes Soulgee really nervous.

Coco tries to make Ice eat Okra, he thinks it wasn’t made for human consumption. She goes on to make a lentil burger, but it’s tasteless. Ice asks how the lessons went with Soulgee, she said it was fine but Ice thinks she is stressed out about it.

Ice organizes a day of go karting for Soulgee but he’s afraid, he had a go kart accident and is afraid to get back in one. Ice tells Soulgee he is in his 30’s and needs to get over it. Ice and Soulgee are both strapped in, Ice takes off Soulgee finally takes off. Ice is thrilled that there is no back seat on a go kart for Coco. Soulgee is a maniac, he picks up speed and Coco tells him that he grew big Spartacus balls.

Soulgee gets behind the wheel of the car again with Coco and does much better this time.

At home, Coco is cooking dinner when Ice walks in and she is making ‘Coco’ tacos because Ice has been so supportive later. Ice only wants tacos and Kool-Aid.

That’s it for tonight, Soulgee survived his driving lesson with Coco and Ice survived healthy eating with Coco.