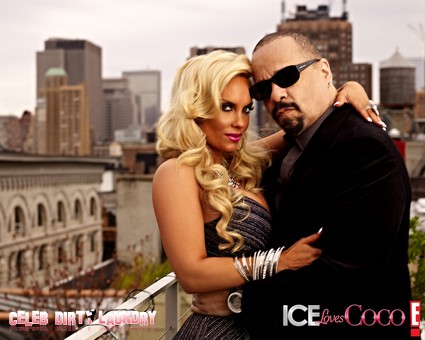 Tonight is the third night of the second season of Ice Loves Coco and it called ‘Baby Got Third Wheel.’  Stay tuned as we live blog the show tonight with all the up-to-the-minute details.  On the last episode that aired two weeks ago Ice & Coco start looking for a new house but have different ideas of what makes a home. When Coco started to look for a house Ice-T was not really into it – but finally he gets the bug and finds a crib in New Jersey which Coco is not crazy about. She does not feel the WOW factor!  If you missed the episode you can read our official recap here!

On this week’s episode Ice and Coco’ romantic trip to Miami is interrupted when Ice’s friend Marc Live shows up then Ice and Coco go fishing. In the preview Ice and Coco are on the beach and Ice tells Coco how wonderful it is to have a private day on the beach together and his friend pipes up and says it sure is.  Coco looks less than thrilled about it.

Coco feels Ice has a problem saying NO to his friends and is always on her about being direct.  However, when it comes to his friends he is different.  Ice’s explanation well every time he goes to lower the hammer on Marc he makes him laugh.  Coco just wants him to practice what he preaches.  A funny part in the clip is when the paparazzi shows up and Ice tell them that Paparazzi in Italian means ‘little insect.’  Coco figures the way to get rid of paparazzi is to give them what they want so she gives them a photoshoot.

The episode looks fun, so don’t forget to to stop by we will be live blogging the show with all the up-to-the-minute details at 10:30 PM EST so make sure to come back to this spot and watch the show with us. While you wait for the recap you can watch a sneak peek video of the episode below!

RECAP: Ice is playing video games when Coco comes in vacuuming in a lepord print bikini top with Spartacus by her side. He tells her that he doesn’t feel well, she pulls out a book she bought on an infomercial and tells him she can find a cure for him.

Ice is at work when Warren, an NFL player is on the set because he is guest starring. Ice is burnt out and tells Coco he wants to get out of New York and go to Miami. Coco has a fish story for Warren, she caught a 131 pound Marlin when they were on their last fishing trip. Ice took the pictures, but he deleted them on accident, now nobody believes the story.

Coco is at dinner with her friend Diana, she tells her that she is going to Miami with Ice to get some alone time.

Coco is packing, she warns Ice to not mess with her catching a fish. She tells him she also wants lovey dovey time in Miami and he tells her that she makes Kool-Aid and sandwhiches romantic.

Ice and Coco are in Miami, Marc, Ice’s friend arrives unannounced. The three head to the beach and Coco is not happy about it. Ice has a problem, he can’t say no to his friends. All of a sudden, the paparazzi arrive and start taking photos. They are there for that one shot, so Coco decides to give it to them. She heads into the water and gives them some provocative photos, then they leave. Ice makes plans to hang out with Marc, Coco is annoyed and heads out shopping all by herself. Ice goes to visit “Mark the Shark”, the last shark hunter alive. Ice explains the story about Coco’s fish that got away, he wants to go out tomorrow and make it happen again. Mark tells Ice that it will be windy tomorrow, but he doesn’t have a problem with making it happen.

Meanwhile, Coco is out shopping with Spartacus, she buys a pair of shoes for $1,000.00. At dinner, Ice with Coco, and Marc who reveals that he is going fishing with them tomorrow. Marc gets up to check out a girl at the bar and Ice takes the opportunity to tell Coco that he didn’t invite Marc to go fishing. Ice starts singing the theme song to Gilligan’s Island to get Coco to laugh.

The next day, Coco and Ice arrive at the boat to find Marc already there. Coco gets on the boat, Ice talks privately with Marc and tells him that he can’t go out on the boat, it’s going to be just he and Coco. Marc is fine with that, he leaves and Coco is happy to be alone with Ice and “Mark the Shark”.

Out on the boat, the winds begin to pick up, Coco’s got a fish, it’s a big one and Ice is trying desperately to keep the camera going as huge waves are hitting the boat.

Coco and the fish are at war, all of sudden she got her bearings and brought the fish in. Once Coco had her picture, she threw the fish back in.

Coco and Ice arrive back at the dock, they are shocked that Marc is ready waiting for them. Marc has a surprise for them, he made them dinner reservations at Mr Chow, his treat for just the two of them alone. Ice makes a joke that he can’t find the camera from earlier today, Coco gives him a look and he tells her it’s just a joke.

That’s it for tonight, don’t forget to come back next week when Coco goes healthy and tries to throw out Ice’s Kool-Aid and junk food.