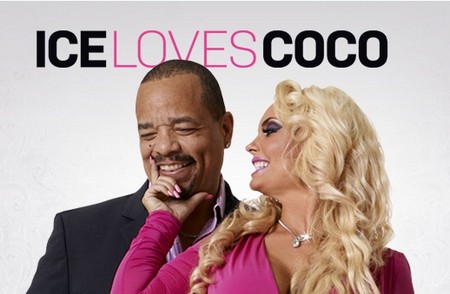 Tonight is the seventh episode of the second season of Ice Loves Coco and its called ‘Baby Got Godparents.’  Stand by as we live blog the episode with all the up-to-the-minute details.  On last we saw the show Coco landed a guest spot on Law and Order: SVU–but she’s been asked to do something that might not please her hubby.  The producers tell her she has to kiss someone.  Did you watch the episode?  If you want to find out how Ice recaps read our full recap here!

On tonight’s episode Ice has a family reunion in Arizona with his daughter, grandson & son, Little Ice. While there, Kristy & Derek ask Ice & Coco to be the godparents of their children.

Ice’s reaction: ‘Yal got something to drink?’ Hi daughter responds: ‘I thought you did not drink.’  Ice laughs that with three children it is time to start drinking.

Meanwhile Ice and Coco hit a party at the Pool After Dark at Harrah’s in Atlantic City last night.  But the adorable couple did not turn up alone they brought along their 2-year-old bulldog, Spartacus!   Spartacus appears regularly on the show and even has his own popular twitter account!  He has over 32,000 twitter followers and if you want to check out what Spartacus is up to visit him here CuteSpartacus

RECAP: Krissy is on Skype with Coco and she asks both her and Ice to be God parents to her three children. Coco jumps right in and says yes for the two of them but Ice feels like she doesn’t know what she is getting in to.

Ice is at work talking about the whole God parent thing, he believes all religion break down to are you a good person or a bad person and doesn’t understand why they would pick him.

Ice and Coco are going ice skating, Coco hasn’t done it since she was ten years old. Ice is on the phone with little Ice, it is his birthday next week when they are going to Arizona. Little Ice has had his heart broken lately and wants to bring a model with him to the party.

Ice and Coco are at Krissy’s and ask what does being God Parents entail, Krissy tells them that it is basically to guide them on the right path and Ice says, “and you ask a butt model and gang banger to be their God parents?”. Krissy goes on to ask if Ice and Coco will care for the children if anything happens to her and her husband, both Ice and Coco are speechless.

Ice tells them that they can never ride in a car together, nothing can happen to them.

Ice’s daughter, LeTesha arrives and then the birthday boy, Little Ice who is turning 20. Ice is spending time with his daughter and grandson who loves football, Ice is thrilled.

The kids are all at the movies, Coco wants to talk to Ice about being Godparents for the three children and thinks it is a huge responsibility to have to care for the three children if anything happened to their parents. Coco doesn’t feel anything is going to happen to her sister or her husband but Ice lost his two parents before he turned twelve and knows that children can sometimes lose their parents.

Ice takes his son and grandson shopping for shoes. Ice tells his grandson that Little Ice is dating a model, just like his dad.

It’s Little Ice’s birthday celebration and they are all at dinner, Little Ice says he is dropping the “Little” effective today. Everyone is laughing and enjoying being together, especially Ice. Both Ice and Coco approve of Little Ice’s new model girlfriend.

The next day, Coco is out for a walk with Little Ice and Spartacus, he tells her that his dad is so much more family oriented since being with her. Coco gives him advice about dating a model, to be confident about himself and not to worry when people pay attention to her.

Ice and Coco are at dinner with Krissy and Derek. Ice finally brings up the subject about being responsible for the children if anything should happen to them. Krissy jumps right in and tells them why they choose them. Ice tells them there is no way they can say no and Derek says good, because nobody else can afford their three kids and they all laugh.

Krissy starts to explain what is going to happen in church and Ice, not being a church person, is feeling a little uncomfortable but he will be there for them regardless.

The day of the baptism, Ice and Coco are the last ones to arrive. Coco participates with the ceremony, while Ice acts as witness.

All of the family is together, Coco’s family and Ice’s family. Krissy makes a toast to the best God parents any kids could ever ask for.