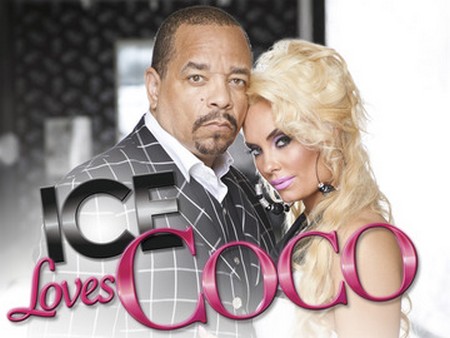 Tonight is the eight episode of the second season of Ice Loves Coco and its called ‘Baby Got Hawaii.’  Stand by as we live blog the episode with all the up-to-the-minute details.

On the last episode  Ice-T was putting the finishing touches on his debut film for Sundance.  Ice learned that cutting down performances for his film was not easy.   He had been working a lot of hours and the decision was difficult but finally he was pleased with the final cut and Ice and Coco headed to the Sundance film festival.  If you missed the show you can read our full and detailed recap below!

On tonight’s episode Coco and Ice celebrate their 11th anniversary in Hawaii and Ice relives his former army days with a tour of his old base.  Generally when Coco and Ice travel it is Coco who handles all the details but because it is their anniversary Ice wanted to handle it.  Ice assures Coco he has it all taken care of.

Coco looks skeptical when Ice lets her know, but Ice assures her he has got it in control. Once they get to Hawaii the surprises keep coming.  Coco is surprised to see Ice at his old base – because as she says Ice takes order from no one.  It looks like another great episode!  I wonder if they will take Spartacus with them, their English bull dog who has been stealing a lot of attention lately.  Check out how Spartacus has been upstaging the paid here.

RECAP: Ice and Coco are heading to Hawaii, Coco got “dog”gles for Spartacus so he can go surfing. Coco is the one always planning the trips, this time Ice is doing all the planning.

Soulgee tells Coco that when he is in love with someone one day, he wants to go to Hawaii. Coco tells him that she just wants to go to a luau like they did on the Brady Bunch. Coco gets a call from the travel agency, Spartacus can’t go, he has to have gotten a rabbies shot a 120 days before departure. Soulgee offers to watch Spartacus, he tells Coco they are going to have a blast.

Ice and Coco arrive in Hawaii, they are welcomed by Keohloa; the “go to” man in Hawaii. The house is “Bombbados” according to Coco. They finish unpacking and are off shopping. Ice used to live in Hawaii, he was in the military and have a lot of respect for people who are still in it. Coco go gets surfing lessons and Ice tells her to use her booty as a counter balance. Coco loves to try everything and Ice loves to watch her try everything.

Coco is on the board, in the ocean, when she falls and Ice loses her. All of a sudden, she is back up and she is surfing. Ice has never seen Coco fail at anything, this time won’t be a first.

Later that day, Coco is in the pool and asks Ice again, what are they doing for their anniversary, but he won’t tell her. Then he asks her if she has ever been near a waterfall, she says no, all the photos of her near a waterfall are photoshopped.

Ice takes Coco to the falls, it is the first time she has ever seen one and she thinks it is absolutely beautiful. Coco goes in the water and swims over to the falls, Ice stays back and takes a photo of her under the falls, she accomplished what she always wanted to do.

It is finally the day of the anniversary, Ice tells Coco that they are going ziplining. Coco love the intenseness of risking their lives together. They are both getting seated, Coco is little more nervous than she thought she would be but once they got going, she loved it.

Before Coco met Ice, she did a modelling job and the one thing she remembers about that trip is a chip truck that she wrote her name on it. They drive by the truck and stop, both sign the names on it and eat shrimp. Ice admits to Coco, he never really discovered the island before he came to Hawaii with her. Coco tells Ice that she wants to go visit the base where he was stationed. The two arrive at the barracks, Ice has not been back since he left 30 years ago. Coco just can’t imagine Ice in the army, it completely blows her mind. Coco is surprised that after eleven years, they are still learning things about each other but Ice thinks when you start not learning new things, means you are not interested in your partner any more. Ice feels like it is a home coming, speaking to all the soldiers, it’s very humbling for him.

Later that night, Coco can’t believe that they have to leave tomorrow. They arrive back at the rental house and all the torches are lit, it is a privater luau. Coco is so happy, she tells Ice that it is the best anniversary, it blows the rest of them put the window.