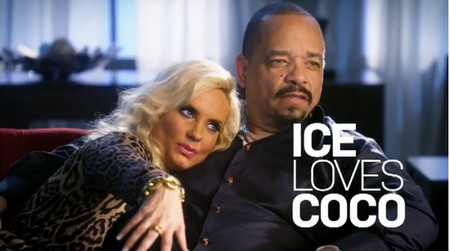 Tonight is the eight episode of the second season of Ice Loves Coco and its called ‘Baby Got Sundance.’  Stand by as we live blog the episode with all the up-to-the-minute details.

On the last episode Ice had a family reunion in Arizona with his daughter, grandson & son, Little Ice. While there, Kristy & Derek ask Ice & Coco to be the godparents of their children.  If you missed the show you can read our full and detailed recap below!

On tonight’s episode ‘Baby Got Sundance’ Ice-T puts the finishing touches on his debut film for Sundance.  Ice is learning that cutting down performances for his film is not easy.   He has been working a lot of hours and the decision have been difficult but finally he is pleased with the final cut and Ice and Coco head to the Sundance film festival where Ice is screening his movie.  Ice is hoping the people at Sundance like his film.

On the trip Coco gets offered a movie role that leaves her with a difficult choice.  It seems a director has a vision of Coco appearing in his movie.  Coco is meeting at the Sundance festival to find out more about the role.  Is Ice  the only one hoping to make big moves in the movie biz?

RECAP: Spartacus met Winnie a few weeks and he made her pregnant, he is going to be a daddy. Ice is doing his directorial debut and Coco follows him all the way, Ice wants to submit it to Sundance which makes Coco happy because she can wear all her ‘snow bunny’ outfits.

Coco is planning to throw a puppy shower for Winnie and Spartacus being that are going to have some little ones. She is out shopping with Soulgee and picks up some party favors while Spartacus goes for a massage.

Back at Ice and Coco’s penthouse, Coco tells Ice that they have lots of fun at the dog store. Ice’s manager, Jorge calls and tells him that his movie made it into Sundance but the film has to be two hours and it is actually three hours, Ice needs to cut one hour out of the film.

Spartacus and the family are at Winnie’s house, Patty, Winnie’s owner, is hosting the puppy shower. Soulgee is also there, Spartacus has opened his heart to dogs.

A few weeks ago Coco did a small part on Law & Order, now Soulgee tells her that a famous director is interested in her for a part in a movie.

Ice has been cutting down his film for Sundance and now feels like it’s good to go. He’s hoping the people at Sundance will like it because he has put his heart and sole into it.

Coco tells Ice that she had a wonderful day, she and Spartacus had fun. She goes on to tell Ice that a director wants to speak to her and she is excited about it. Ice reminds Coco that she may have to move for a role and that doesn’t make her happy.

Ice and Coco are in Sundance, he’s excited about premiering his movie and she is making a fashion statement.

Coco meets Rusty, the film director, he wants her to star in a movie about a mother and a wife, whose father was a cop. It’s a bad ass mother, who wants to find out who killed her family. It’s a big part, Coco would play a character like “Pam Greer”. Rusty tells her that she would be perfect for the part and they would be filming in New Mexico. Coco tells him that she is interested, but not being away from her husband for two months. Rusty tells that being a star, she may have to start making some sacrifices.

Ice is so nervous, in ten minutes his film will either be a hit or a flop, it’s called “The Art of Rap, Something for Nothing”. Ice’s film is a success, it made two years of work well worth it.

Back at the hotel, Ice is reading the reviews and they are all good, he is so happy. Coco talks to Ice about the offer she got for the film, she tells him that they film will be shooting in New Mexico for two months and she doesn’t want to leave him. Coco tells him that she is just not going to do it because she doesn’t want anything to get in the way of their relationship – because it’s bigger than any movie.