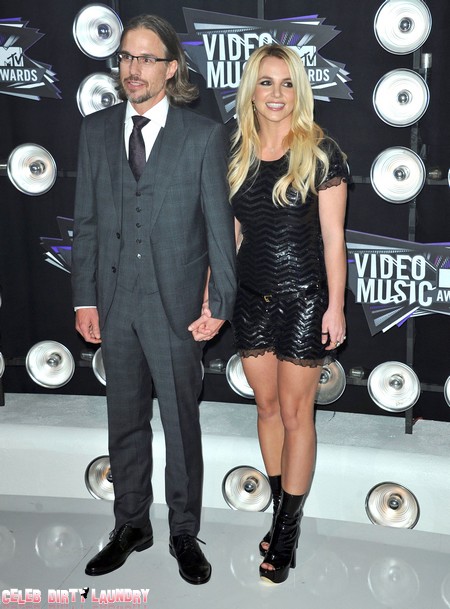 Britney Spears fiancé, Jason Trawick is trying to get the court to make him co-conservator of the deranged popstar.  So not only will Jason be Britney’s husband but he will have almost total legal control over everything and anything she does.  What the heck is this – how can a person be deemed sane enough to marry but not sane enough to be considered a legal adult?

Britney is currently owned by her conservator, Jamie Spears, who happens to be her father – despite the fact that Britney travels the world performing like a trained lip-syncing animal, the court still allows her dad to run her life as if she were a child.  Now Jason wants in on the action. Jamie was placed in charge of his daughter’s legal and business affairs in 2008 following the singer’s total breakdown and hospitalization.

Something is definitely not right here.  We have no doubt that Britney was crazy before but now she seems to be able to handle the stresses and responsibilities of a full-time celeb career.  Furthermore, the court deemed her sane enough to marry Jason.  So how can the same court not grant Britney the normal rights and freedoms allowed all American adults?  Now her future husband wants legal control over her?

There is something really medieval, something ugly and primitive about all this.  If Britney can choose to marry then she must be considered sane – if she is considered sane then why is the court treating her like she is mad?  What do you think?  Is Britney sane enough to marry Jason.  Does Jason love Britney or is he just another prop secured by her father to keep his cash cow producing?