Inside A Kennedy Tragedy: Why Mary Kennedy Took Her Own Life

BY Kinsley Goldman on May 23, 2012 | Comments: one comment
Related : Tabloid Wednesday 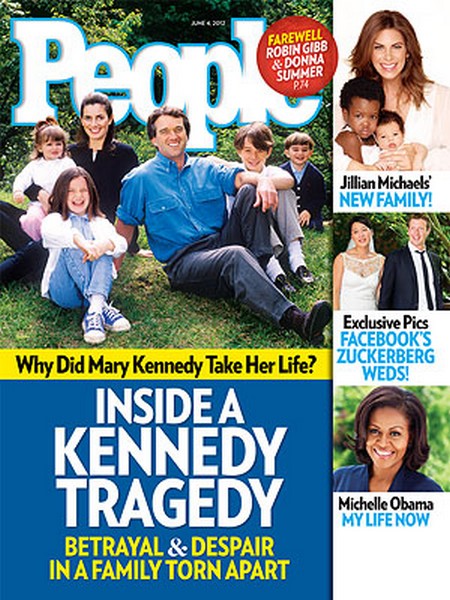 The current issue of People Magazine features the cover story ‘Inside a Family Tragedy – What Drove Mary Kennedy To Suicide?‘  Mary Kennedy was found dead at her Mount Kisco estate in Westchester County, New York on May 16, 2012. A housekeeper found her body upon entering the barn.  Mary had waged an ongoing battle with prescription drugs and alcohol and was said to have sought out help on many occasions.

People magazine has more on the story:   On May 18, two days after his estranged wife died, RFK Jr. told funeral mourners that Mary suffered from “demons.” “There’s nobody who bore what she bore,” said Kennedy, 58. “She was in agony for five years.”     It was a point also made by his sister, Kerry Kennedy, who spoke about her friend’s lifelong struggle with depression.

But many of Mary’s friends and loved ones took offense to the Kennedys’ comments. “Mary did not have a history of depression,” says a close friend. “She became a troubled person because of the divorce.”

Her friends claim she did not have a history of depression and they are offended by the comments made by the Kennedys.  They say the reason she was troubled was the contentious divorce with from Robert Kennedy Jr. and their ongoing custody battle over their four children.  “There was great pressure on her to conceivably agree to a situation where she wouldn’t be able to see them for some period of time,” says the close friend. “She couldn’t take it.”

Her friend claims the alcohol and drugs certainly led to her committing suicide but Mary really died of a broken heart.

To find out more details on the bitter Kennedy Family feud, pick up the current issue of People Magazine, on newsstands Friday.