Inside Adele’s World As She Prepares For Motherhood 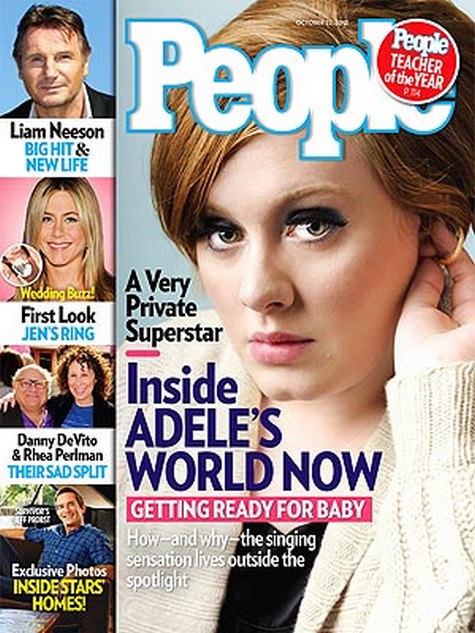 Who doesn’t love Adele?  Her voice is amazing and she has kept her life very low-key since announcing her pregnancy. It’s time for an update from the songstress and her People cover article couldn’t have dropped at a more perfect time. Last week she unveiled her lead track to the new James Bond movie, Skyfall, which garnered instant praise. According to the movie’s producer, Barbara Broccoli, Adele took her time with the song and even read the films’ script to ensure that she got it just right. As for her pregnancy and those rumors indicating that she may have already tied the knot, well according to the magazine life is fabulous. “She is just thrilled. She is totally laying low and nesting.”

Also inside the new issue are details on the sad bust up of Danny DeVito and Rhea Perlman’s 30 year marriage.  While many of us were shocked to see this Hollywood couple call it quits, insiders seem to indicate that the writing has been on the wall for a long time. Supposedly Danny is a huge womanizer and after eons of looking the other way, Rhea could no longer ignore it and laid the groundwork for the split. Grab the issue for more details on the couple and how their three children are handling the major shake up.

We’ve all heard about Jen Aniston’s engagement to Justin Theroux. We’ve got proposal details and wedding rumors but finally, here is the actual ring on Jen’s hand. According to a source close to the lovebirds they are quite the match. “It’s amazing to see how happy Justin makes Jen, and everyone was always hoping that he would propose.” And propose, he did. But what do you think of the ring?  It kind of reminds me of a melted ice cube!

I’m a huge Liam Neeson fan so having him on the big screen AND in People is a great treat for me. He’s enjoying box office success this week with Taken 2 but inside this article you’ll learn all about his new life now, three years after the death of his wife, Natasha Richardson. Grab the latest issue for more on these great cover stories!