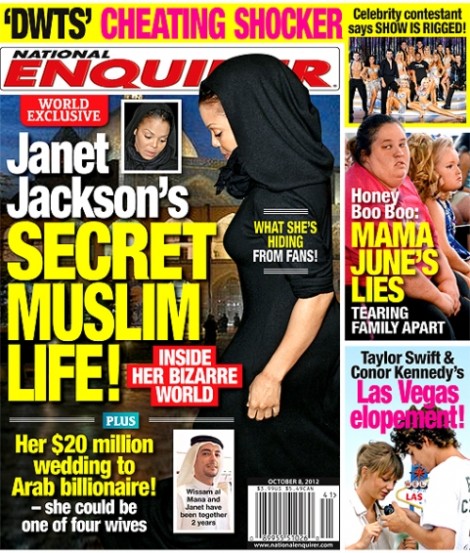 Janet Jackson has been walking around town with a scarf around her head so now the National Enquirer insists she’s a Muslim! But is this a case of where there’s smoke there’s fire?

Janet Jackson and Wissam Al Mana have been dating since Janet broke it off with Jermaine Dupris a couple years ago. The Arab businessman is LOADED and Muslim and National Enquirer’s cover suggests she’s converted for her man. Did she convert for a wedding? Janet and the rest of those Jacksons were raised devout Jehovah’s Witnesses but the magazine declares she’s preparing for a $20 million wedding and to become one of Wissam’s four wives. I’m not sure if Wissam has any wives yet. I don’t think he does but Muslim men can have four although a very small percentage of them actually do take more than one.

But where’s the scandal in that? Janet could be a first wife, and since I’m a sucker for all things Big Love and Sister Wives, I think the first wife is the way to go. It sucks that you’d have to sit back and watch all the new blood come in but at least you’re usually the one in charge.

So did Janet Jackson convert? Who knows. What I do know is she’s a Jackson and they aren’t the stablest branches on the tree. I wouldn’t put it past her. It’s not like it’s the worst thing in the world. It’s not as bad as slapping your young niece and calling her a b-tch. Let’s revisit this topic if it turns out Wissam has some other wives hidden away. Then I think we could all agree on a WTF. For now, the scarf is one of the most normal things a Jackson family member has worn around his/her head in awhile.

Would it bother you if Janet Jackson’s secret involved becoming a Muslim? Is her outfit being blown out of proportion or do you think she is converting for her boyfriend?