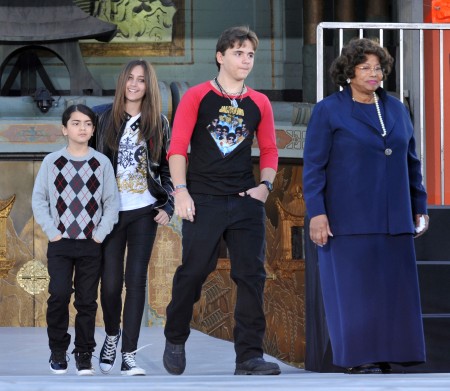 Michael Jackson’s kids: Blanket, Prince and Paris Jackson are consulting with their attorney after Jermaine, Randy and Janet Jackson went to their home yesterday and tried to physically remove them.

Let’s recap before we go further because this is confusing. Katherine Jackson was reported missing on Sunday and her grandchildren said they hadn’t seen her in over a week. Jermaine came out with a statement saying Katherine was in Arizona with her daughter Rebbie Jackson relaxing. Apparently it was Janet’s idea to get Katherine out of Calabasas because the stress over the fight over Michael Jackson’s estate was taking a toll. Katherine Jackson is 82 years old and her children are still teenagers. Not sure how that happened.

OK, so according to Radar Online, Randy, Jermaine and Janet had the bright idea to fly the kids to see their grandmother in Arizona (and make sure all the media cameras were there to film it) so the family could be (portrayed as) happy and reunited again. Crazy ass Jacksons….

“Randy was telling Prince Michael he had to leave with them and that he had a private jet chartered to take them all to Arizona to see Katherine. Prince firmly held his ground and told Randy he wasn’t going anywhere with them. The security detail prevented the three of them from taking the kids out of state. The cops had to be called and Janet kept saying they had a legal right to be at the house when in fact they don’t. The rental house is in the name of Michael Jackson’s estate, so they were told to leave immediately. For the time being, they won’t be allowed to come back to the rental house and guards at the security gate have been told under no circumstances are they to allow them in. Paris was absolutely hysterical and kept telling her uncles to just bring her grandmother home,” a source close to the situation tells RadarOnline.com.

“The plan to take the kids out of the house was going to be a publicity stunt. The kids were going to be paraded into the house in Arizona where Katherine is staying and those photos would be published on a website favored by Randy Jackson.”

Since then, Michael’s children have consulted with the attorney that has represented them – and only them – since their father’s death three years ago. They are working towards keeping themselves safe because they have some of the most unstable relatives OF ALL TIME. Oh, and apparently Paris got down with Janet. But I always thought Janet was the normal one? Maybe there really is no such thing as a “the normal one” in the Jackson family. Regardless, Paris is a little bad ass.

“It’s certainly extremely concerning to Margaret Lodise that Katherine has been out of town for over a week and that the children haven’t spoken to her in that time. Katherine needs to get home quickly because there could be far reaching consequences as far as custody of the kids goes as it pertains to Katherine. It’s very likely that Lodise will be going to court as early as Tuesday to express her concerns to the judge, as she has a legal obligation to do so.

“Paris got into a scuffle with her aunt Janet upon entering the house because she told Paris she had to stop posting family information on Twitter. Janet physically tried to take Paris’ cell phone from her, but she wouldn’t give it up. It was just a very, very unfortunate situation that didn’t need to occur. If Katherine isn’t physically capable of taking care of the kids anymore, then the Courts are going to get involved, and very quickly. The kids can’t be caught in the middle of the ongoing drama of the Jackson family, period.”

Janet better step off! She and Paris have been bickering back and forth lately regarding Paris’s burgeoning acting career. Janet wants her to wait and go to school and Paris wants to go full speed ahead now. So… they have issues. Trying to take a teenager’s cell phone away doesn’t help the situation.

Like I’ve said before, this isn’t close to being over. We’ll keep you posted. One thing’s for sure, Katherine better get back and slap some sense into those kids. They are causing all sorts of trouble and a whole lot of sh-t is about to go down.