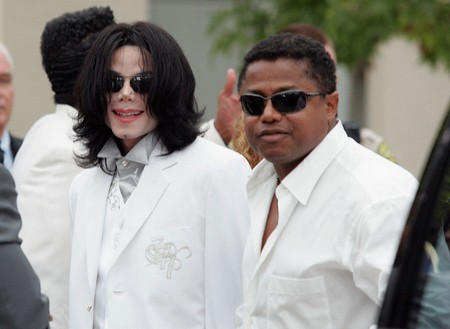 Money makes the world go round’ and Randy and Jermaine Jackson are allegedly broke and angling for late brother, Michael Jackson’s estate.  It looks like they are trying to use Katherine Jackson’s health as a loophole to get their hands on the cash.  Randy, Jermaine, Janet Jackson, Tito Jackson and Rebbie Jackson all signed a letter asking the Executors to be removed because the stress of the situation has caused aging Katherine to have a stroke.  How convenient because then someone else (ahem, Randy and Jermaine maybe) would need to step in to, help. The Estate itself is thriving, so much so that in two years it has completely eliminated all of Michael’s previous debt.

Those connected with the Estate are now fighting back, telling TMZ they believe Randy and Jermaine are completely broke and know when Katherine dies there is no way they can get their hands on any of MJ’s fortune — that’s because all of the money goes to charity and in trust for Michael’s 3 kids.

Do you think that Randy and Jermaine would resort to dirty tactics to save their own finances?   Would they dip into the estate and take from Michael’s kids in order to put food on their own tables?  Tell us your thoughts in the comments below!